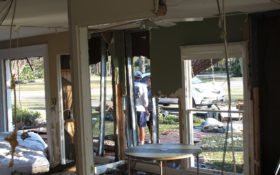 The piano was washed into a ditch across the street. The dining room table became lodged against a neighbor’s tree. And the storm surge that gutted Rex and Nancy Buzzett’s home of 44 years scattered their other belongings as far as two blocks.

“It busted through the windows, and once it did that, it floats the furniture up,” said Rex Buzzett, a former city commissioner in this Gulf Coast town of 5,000. “The furniture rolls around in there like being in a washing machine and bangs out everywhere, trying to get out. The results are there behind me.”

The Buzzetts returned home Thursday to find Hurricane Michael had sent about 9 feet (3 meters) of water smashing into their house and their neighbors’ homes, which face the Gulf of Mexico across a narrow coastal highway. Windows shattered and brick walls crumbled, and most everything inside their home came spilling out.

“It uprooted these huge trees, but that big house doesn’t have a speck of damage on it,” Judi Stokowski said as she cruised around Apalachicola on Thursday in the six-seat golf cart she uses for guided tours.

Stokowski’s 120-year-old home escaped damage. Her golf cart weathered Michael outdoors and started right up after the storm passed. Her gift shop, where she sells T-shirts and rubber alligators, wasn’t so fortunate. Clothing, handbags and costume jewelry got soaked by thigh-high storm surge that swamped the business district and left the streets thick with mud.

“It is what it is,” Stokowski said. “I’m just glad my house is all right.”

Even homes on neighboring St. George Island, which sits in the Gulf, separated from the mainland by a 3-mile (5-kilometer) causeway, stood up to Michael’s fury. They largely stayed dry, mostly because they are on stilts.

Josh Cadwallader and his mother came home to the island to find their home missing pieces of wood from its front steps and porch, but otherwise dry and intact.

The beach town was littered with shingles, strips of metal siding and soggy insulation. But there was little destruction.

“It’s all built to take it,” Cadwallader said. “You’ve got to have a house that can withstand it.”

In Port St. Joe, where the homes of the Buzzetts and their neighbors are built low to the ground, the couple gathered up framed photos and a few shirts and set them on the trunk of an uprooted tree to dry out. Other photographs were piled into a laundry basket.

Two guitars survived because they were stashed in their cases upstairs. The Buzzetts and their grown son had evacuated to a relative’s home on higher ground nearby.

Boarded-up windows and sandbags didn’t save their home. But after four decades of living on the waterfront, the Buzzetts don’t plan to live anywhere else.

“We’ll rebuild on this spot, but we’ll have to bulldoze everything,” Rex Buzzett said. “We’ll build up higher. But how high?”