HURRICANE WARNING! Joaquin turning towards US. Here's what you need to know - The Horn News 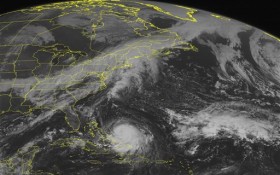 The U.S. National Hurricane Center’s long-term forecast showed the storm could near the US East Coast along North Carolina and Virginia on Sunday.

“Residents of the Carolina’s north should be paying attention and monitoring the storm. There’s no question,” said Eric Blake, a hurricane specialist with the center. “If your hurricane plans got a little dusty because of the light hurricane season, now is a good time to update them.”

The storm gained strength as it bore down on the central Bahamas early Thursday, and forecasters said it was likely to grow into a major storm while following a path that would near the U.S. East Coast by the weekend.

Some minor damage was reported by Bahamas officials late Wednesday, and islanders rushed to prepare for storm surges and heavy rain from the approaching Joaquin. Authorities said the center was likely to pass near or over several islands during the night and Thursday.

Joaquin was a Category 3 storm with maximum sustained winds of 120 mph (195 kph) and hurricane strength winds extending 35 miles (55 kilometers) from the eye early Thursday, the US National Hurricane Center in Miami said. As of 5 a.m. EDT, the center of the storm was about 20 miles (35 kilometers) north of Samana Cays, Bahamas, and moving west-southwest at 5 mph (7 kph).

The storm was predicted to turn to the north and northwest toward the United States late Thursday or Friday, but forecasters were still gathering data trying to determine how it might affect the US.

“We’ve got Air Force reconnaissance planes continuously giving us data from inside the hurricane this morning, and we’re going to be throwing a lot more aircraft resources at this problem over the next few days because it still is not certain whether or not Joaquin will directly impact the U.S. East Coast or stay out to sea,” said Rick Knabb, director of the National Hurricane Center.