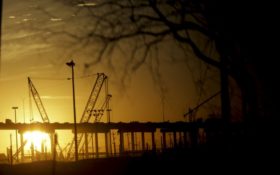 A toxic onslaught from the nation’s petrochemical hub was largely overshadowed by the record-shattering deluge of Hurricane Harvey as residents and first responders struggled to save lives and property.

More than a half-year after floodwaters swamped America’s fourth-largest city, the extent of this environmental assault is beginning to surface, while questions about the long-term consequences for human health remain unanswered.

County, state and federal records pieced together by The Associated Press and The Houston Chronicle reveal a far more widespread toxic impact than authorities publicly reported after the storm slammed into the Texas coast in late August and then stalled over the Houston area.

Nearly half a billion gallons of industrial wastewater mixed with storm water surged out of just one chemical plant in Baytown, east of Houston on the upper shores of Galveston Bay.

Benzene, vinyl chloride, butadiene and other known human carcinogens were among the dozens of tons of industrial toxins released into surrounding neighborhoods and waterways following Harvey’s torrential rains.

In all, reporters catalogued more than 100 Harvey-related toxic releases — on land, in water and in the air. Most were never publicized, and in the case of two of the biggest ones, the extent or potential toxicity of the releases was initially understated.

Only a handful of the industrial spills have been investigated by federal regulators, reporters found.

Texas regulators say they have investigated 89 incidents, but have yet to announce any enforcement actions.

Testing by state and federal regulators of soil and water for contaminants was largely limited to Superfund toxic waste sites.

Based on widespread air monitoring, including flyovers, officials repeatedly assured the public that post-Harvey air pollution posed no health threat. But the U.S. Environmental Protection Agency official in charge now says these general assessments did not necessarily reflect local “hotspots” with potential risk to people.

Regulators alerted the public to dangers from just two, well-publicized toxic disasters: the Arkema chemical plant northeast of Houston that exploded and burned for days, and a nearby dioxin-laden federal Superfund site whose protective cap was damaged by the raging San Jacinto River.

Samuel Coleman, who was the EPA’s acting regional administrator during Harvey, said the priority in the immediate aftermath was “addressing any environmental harms as quickly as possible as opposed to making announcements about what the problem was.”

In hindsight, he said, it might not have been a bad idea to inform the public about the worst of “dozens of spills.”

Local officials say the state’s industry-friendly approach has weakened efforts by the city of Houston and surrounding Harris County to build cases against and force cleanup by the companies, many of them repeat environmental offenders.

“The public will probably never know the extent of what happened to the environment after Harvey. But the individual companies of course know,” said Rock Owens, supervising environmental attorney for Harris County, home to Houston and 4.7 million residents.

The chairman of the Texas Commission on Environmental Quality, Bryan Shaw, declined when asked by lawmakers in January to identify the worst spills and their locations. He told a legislative subcommittee hearing he could not publicly discuss spills until his staff completed a review.

The amount of post-Harvey government testing contrasts sharply with what happened after two other major Gulf Coast hurricanes. After Hurricane Ike hit Texas in 2008, state regulators collected 85 sediment samples to measure the contamination; more than a dozen violations were identified and cleanups were carried out, according to a state review.

Reporters covered some environmental crises as they happened, such as AP’s exclusive on the flooding of toxic waste sites and the Chronicle’s Arkema warnings before fires broke out. But the sheer quantity of spills was impossible to document in real time.

Academic researchers are now trying to fill in the gaps in environmental monitoring, helped by grants from the National Science Foundation and National Institute of Environmental Health Sciences. One project, a Harvey-related public health registry for Houston, was funded just this month but is not yet underway.

“People are left in a state of limbo of not knowing if they were exposed or not — or if they were, what the implications are for their health,” said Dr. Nicole Lurie, who oversaw federal public health responses to the Superstorm Sandy and Deepwater Horizon disasters while at the U.S. Department of Health and Human Services.

Scientists say the paucity of data also could hamstring efforts to prepare for and mitigate damage from future violent weather events that climatologists predict will happen with increasing frequency.