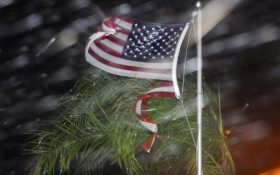 Crews scrambled Thursday to restore power to more than 200,000 customers who lost electricity service when hurricane-force winds toppled trees and utility poles across much of western New York.

Officials at three utilities said it will be days before customers in some stricken areas get their power back on, making the repair work more urgent because an approaching cold front is expected to bring snow, more high winds and temperatures plummeting into the 20s and teens.

National Grid, RG&E and NYSEG reported about 207,000 homes and businesses without power as a result of Wednesday’s windstorm that tore across the state’s western end. Most of the outages, more than 100,000, are in Monroe County, which includes Rochester.

High winds began hitting the region Wednesday afternoon, knocking out power across from the state’s southwestern corner through the Buffalo area to Lake Ontario’s southern shoreline. The National Weather Service said a wind gust of 81 mph was recorded at the Rochester airport.

Dozens of school districts from the Buffalo area east to the Finger Lakes region called off classes Thursday because they had no electricity.

Around Rochester, the fierce winds tore apart business signs, toppled large trees onto homes, sent utility poles crashing across suburban roads and churned up 10- to 14-foot waves on Lake Ontario. Despite all the destruction, no serious injuries were reported.

Utility and public works crews toiled amid tangles of tree branches, downed wires and fallen poles in the effort to get the lights back on.

“It’s very dangerous. Trees are dangerous in themselves, but when you combine them with the downed utility lines, it really makes you nervous,” David Seeley, supervisor for the town of Irondequoit near Rochester, told Time Warner Cable news.

The National Weather Service said the forecast for the weekend across western New York calls for bitter cold conditions starting Friday and lasting into next week, with snow showers and winds gusting to 45 mph predicted for some areas near Lake Erie and Lake Ontario.