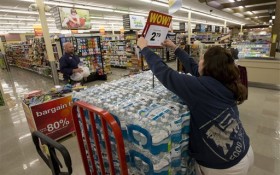 With already-saturated soils and flooded roads, East Coast states were bracing for another day of dangerous weather Friday as forecasters predicted more downpours and a possible landfall from the powerful Hurricane Joaquin.

Two storm-related deaths have already occurred in the Carolinas, where heavy rain has fallen for days.

Governors declared states of emergency in at least five states as forecasters warned of flash floods from historic Charleston, South Carolina, to Washington, D.C. — regardless of whether Joaquin comes ashore or tracks farther out to sea.

“I know we like to focus on the hurricane,” said David Novak, director of the National Oceanic and Atmospheric Administration’s Weather Prediction Center in College Park, Maryland. But whatever track Joaquin takes, “we’re becoming increasingly confident and concerned about the heavy rainfall.”

Streets and homes can still get walloped with rain and flooding associated with the hurricane even if it is 1,000 miles away, forecasters said. And because Joaquin can keep funneling tropical moisture into storm No. 1 from afar, even an out-to-sea Joaquin can worsen flooding.

The latest forecast track for the hurricane early Friday showed it was expected to stay off-shore as it moved northward over the coming days.

But the certainty of additional damaging rains and floods in coming days prompted governors to declare states of emergency in Maryland, New Jersey, North Carolina, South Carolina, and Virginia.

The fatal unpredictability of the rain was shown when a Thursday morning downpour dumped 4 inches on Spartanburg, South Carolina in a short time, causing flash floods that submerged several cars.

Sylvia Arteaga was driving home after a night shift at Grace Management Group on Thursday morning when authorities said the floodwaters trapped her underneath a railroad bridge at the edge of Spartanburg, drowning the 56-year-old woman.

Hattie Palafox, a middle-school teacher and family friend, described Arteaga as a “very sweet, very kind, very loving” mother of 17- and 20-year-old daughters. Palafox said she had discussed the weather forecast with Arteaga earlier this week, but she hadn’t seemed concerned about the expected heavy rains.

“She was very, very soft-spoken. I couldn’t say enough about her,” Palafox said after placing a bouquet of flowers at Arteaga’s home, not far from where she died.

Palafox said she made it a point to keep up with Arteaga and her two daughters after Arteaga’s husband died of a heart attack two years ago.

Authorities around the region have warned of saturated soil giving way to falling trees, which appears to have played a role in the death near Fayetteville, North Carolina. North Carolina Highway Patrol Lt. Jeff Gordon said the fatal crash happened on Interstate 95 about 1:30 p.m. when a tree fell across the road, hitting two vehicles.

Gordon says the passenger in one of the vehicles died, and the driver was taken to the hospital. There was no word on the survivor’s condition, and the driver of the second vehicle was not hurt.

Gordon said the area has had a lot of rain in the past several days. The National Weather Service reported light rain and winds of about 10 mph around the time of the crash.