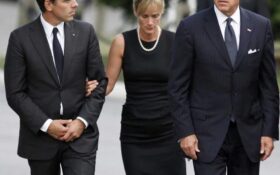 She had previously teased excerpts from her book in interviews with People magazine… but she withheld one bombshell until the book’s release date.

In the memoir, Buhle discussed her ex-husband’s much-contested finances. Specifically, she touched on the role of his business partner Eric Schwerin.

Schwerin “managed almost every aspect of [their] financial life,” Buhle wrote in a passage reviewed by Fox News Digital.

Since 2018, Hunter Biden has been under federal investigation for his business dealings.

Buhle told People magazine earlier this month, “I kept my head so deeply buried in the sand on our finances.” She added that she “couldn’t be of any help” to investigators.

Still, Buhle noticed something odd about her ex-husband’s pocketbook. In an excerpt published by People, she confessed her confusion about her family’s source of income.

“I didn’t understand any of it, or what pieces of his businesses actually generated income for us,” she wrote at the time.

After we met some of the guests, Hunter was introduced to more men, and I drifted away…

I settled on a seat in the corner of the room with Eric, Hunter’s business partner. By now Eric managed almost every aspect of our financial life, so our relationship was an odd one. Born of mutual need, perhaps. But I trusted him. Now we sat on the fringe of the cocktail party, staring at the scene as if it were a movie.

“Who are these people?” I asked him. “And why is everyone here so good looking?”

“Lorenzo is a good guy,” Eric said, laughing. “He’s good for our business.”

Schwerin has not been accused of any crimes.

Still, Schwerin has fueled concerns about a lack of transparency. He visited the White House at least 27 times during President Joe Biden’s tenure as vice president, according to visitor logs reviewed by Fox News in April.

Some Republicans are preparing for their party to regain its majority in the House after the midterm elections, and they’ve promised to use this power to launch oversight investigations into the Biden family.

“We are going to take power after this next election,” Rep. Matt Gaetz, R-Fla., said in December, according to The Washington Post.

“When we do, it’s not going to be the days of Paul Ryan and Trey Gowdy and no real oversight and no real subpoenas,” he continued, referring to former House Speaker Paul Ryan and former Rep. Trey Gowdy, a Republican of South Carolina and a onetime head of the Benghazi committee.

As of Wednesday, Buhle’s memoir If We Break stands as Amazon’s “#1 New Release” for its genre.