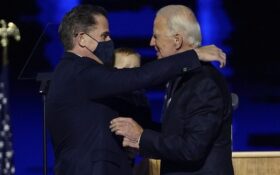 If Hunter Biden’s laptop proves anything, it’s that the Biden family is sick.

Now, there are reports. Hunter worried that, while he was out living the drugs-and-party lifestyle he documented on his laptop, he might have contracted the virus that causes AIDS… and passed it on to other members of the Biden clan.

One of the emails retrieved from Hunter’s laptop shows the president’s son telling his brother Beau’s widow to have a blood test for the deadly STD.

The subject line said, in capital letters, “YOU NEED TO GET TESTED FOR HIV HALLIE.”

Hunter started romancing his brother’s widow shortly after Beau Biden died of brain cancer. But as his laptop proves, he had flings with more than his share of women on the side.

One of those was stripper Lunden Roberts, who would give birth to his child in 2018.

About a month before the child—whom Hunter reportedly has nothing to do with—was born, he warned Beau’s widow he might have given her HIV.

“TODAY. I am getting tested today,” he told her.

The email, published by the New York Post, shows that Hunter’s cheating seems to have taken a toll on the relationship.

“I have been sick scared Hallie and you [hang] up on me,” Hunter wrote.

“The love you give is so disturbing,” he wrote—a line that sounds ironic considering he thought he had given her HIV from cavorting with strippers while high on crack.

But Hunter Biden actually accused his flame of being mentally ill—and suggested she get psychological therapy.

“You’ve found a new release for your poisoned mind,” Hunter wrote. “You need serious long term professional help and I hope you get it. I promise I will try my best to make that happen.”

“I love you hHallie [sic] even when youre cruel,” he wrote. “GET TESTED AND TELL ME RESULTS Today.”

That was one of the last pages of a truly twisted relationship.

Hunter was married to Kathleen Biden at the time. But things went sideways when Kathleen found intimate, explicit messages between her husband and her sister-in-law on Hunter’s iPad, Hunter wrote in his book Beautiful Things last year.

Hunter Biden urged brother's widow to get tested for HIV during their affair https://t.co/5oJ4Tk0lHN pic.twitter.com/wZxTSnHAlx

The tone you’re using with me is so angry,” he emailed her a few days before asking her to take an AIDS test.

Hallie defended herself, saying that Hunter shouldn’t be lecturing her on how to get clean when he hadn’t lived “a day of sobriety yet.”

Then, she thanked him for the “passive aggressive a[–]hole email.”

Joe Biden always supported the keep-it-in-the-family relationship, saying on the campaign trail, “We are all lucky that Hunter and Hallie found each other as they were putting their lives together again after such sadness.”

Of course, Hallie and Lunden were only two of the women in Biden’s life. Authorities have reportedly questioned a third, Zoe Kesten, who lived it up with Hunter during 2018.

Reportedly, they asked if Kesten knew where Hunter got the money to pay for the luxury hotels where they partied down.

Even during pampering, his use of one woman after another and his haze fueled by drugs and sex, the laptop shows there’s somebody Hunter looked down on: Bill Clinton.

Even he couldn’t believe the money-grubbing ways of the Clinton family.

He pointed out that two of the Clinton family’s aides, including Huma Abedin, worked for the government and had private-sector salaries at the same time.

“Are you f[—]ing kidding me. How greedy can you possibly be?” he asked.

The way the Clinton insiders acted was nothing more than “Petty, Greedy, Venal, Low Rent bulls[—].”

But if Hunter Biden spent his life holding a percentage of his investments for his dad, while Joe Biden was a U.S. senator and then vice president and, possibly, president of the United States, what does that say about his dad?

Political greed is a virus inside the body politic.