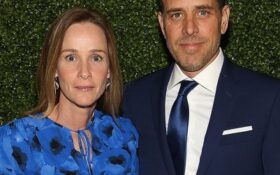 In 2017, Buhle filed for divorce from First Child Hunter Biden amid concerns over Biden’s substance abuse. Now, Buhle is releasing a tell-all memoir called If We Break… mere months before the midterm elections.

Buhle married Biden in 1993, around the time of Biden’s stint in law school.

During the marriage, she had three children with Biden and served at the D.C. Volunteer Lawyers Project, a nonprofit focused on women’s issues and domestic violence.

Buhle told People on Wednesday, “When my marriage ended, I felt like I’d lost my sense of who I was.”

“Anyone who has seen addiction ruin a relationship, or been through infidelity and divorce, can tell you how devastating it feels. But what I also realized through those crushing experiences is that I needed to find a way to stand on my own,” she continued.

“Writing this book has been incredibly healing for me… and my hope is it will be meaningful to those who have been through addiction or divorce, and especially to women who have felt like their entire identity was tied to their spouse. In the end, divorce allowed me to find my strength.”

Buhle’s publisher described the book as a “chronicle of radical honesty.”

For decades, Kathleen Buhle chose to play the role of the good wife, beginning when, as a naïve young woman from a working-class family on the South Side of Chicago, she met the dashing son of a senator at the Jesuit Volunteer Corps in Oregon…

When Hunter’s drinking evolved into dependency, she was forced to learn how rapidly and irrevocably a marriage can fall apart under the merciless power of addiction.

'When the lies became insurmountable, Kathleen was forced to reckon with the compromises she had made to try to save her marriage.' Hunter Biden's ex-wife (married 1993-2017) will publish a memoir in June. https://t.co/fnd0ETGmVa

Buhle has remained out of the headlines since the separation. Meanwhile, Biden himself has allegedly had an intervention, worked as a painter, dated his brother’s widow, and fathered a child with a D.C. stripper.

Last year Biden released his own memoir, Beautiful Things. The memoir touched on his divorce, along with his addiction and his career in Ukraine. However, the memoir was criticized as too scripted — too full of distracting details.

If We Break will hit shelves on Jun. 14, according to Buhle’s publisher. That’s during the primary elections for the midterms.