Hundreds of union thugs attack, two managers forced to flee for their lives - The Horn News 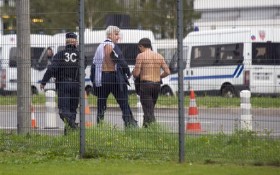 Union activists “protesting” proposed layoffs at Air France had enough talk, and decided to storm the company headquarters during a meeting. Once inside, they zeroed their mob frenzy on two managers, who were forced to run for their lives. After the brutal assault tore the shirts from their bodies, the two managers scaled a fence to escape the mob and fled under police protection.

An Associated Press photographer saw about a hundred activists rush the building. The managers who fled included the head of human resources.

Alexandre de Juniac, the CEO of Air France-KLM, announced Friday the company would have to cut jobs after failing to reach an agreement with pilots. French media reported a proposal to slash 2,900 jobs.

De Juniac said the company was being squeezed by low-cost airlines in Europe and Gulf carriers for long-haul flights. Monday’s meeting was intended to detail the cuts, which he told Europe 1 radio would be “significant.”