HUGE tax changes coming… thanks to Trump - The Horn News 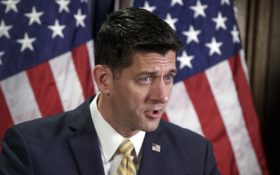 The House on Thursday passed a $4.1 trillion budget plan that reflects President Donald Trump’s campaign promises like deep cuts to social programs while paving the way for a GOP drive to rewrite the tax code later this year.

The 2018 House GOP budget reprises a plan to turn Medicare into a voucher-like program for future retirees as well as the party’s efforts to repeal the “Obamacare” health law.

Instead, the nonbinding budget’s chief purpose is to set the stage for a tax overhaul plan that is the party’s top political priority as well as a longtime policy dream of key leaders like Speaker Paul Ryan.

The plan, passed by a near party-line vote of 219-206, calls for more than $5 trillion in spending cuts over the coming decade, promising to slash Medicaid by about $1 trillion over the next 10 years, cutting other health care costs, and forcing huge cuts to domestic programs funded in future years by Congress.

Those GOP proposals for spending cuts are limited to nonbinding promises, and even a token 10-year, $200 billion spending cut package demanded by tea party House Republicans appears likely to be scrapped in upcoming talks with the Senate.

Instead, the motivating force behind the budget measures is the Republicans’ party-defining drive to cut corporate and individual tax rates and rid the tax code of loopholes. They promise this tax “reform” measure will put the economy in overdrive, driving economic growth to the 3 percent range, and adding a surge of new tax revenues that would help bring the budget toward balance.

Passing the measure in the House and Senate would provide key procedural help for the tax measure because it sets the stage for follow-on legislation that can’t be filibustered by Senate Democrats.

“Through reconciliation, our budget specifically paves the way for pro-growth tax reform that will reduce taxes for middle class Americans and free up American businesses to grow and hire,” said Rep. Diane Black, R-Tenn., who chairs the House Budget Committee.

Eighteen Republicans opposed the measure, including several from high-tax states like New York and New Jersey who are concerned that the upcoming tax effort would repeal the deductions for state and local taxes.

Democrats blasted the sweeping spending cuts proposed by Republicans — more than $5 trillion over 10 years in the House plan and somewhat less in the Senate GOP measure — as an assault on middle-class families and the poor.

The House vote comes as the Senate Budget Committee is considering a companion plan that differs in key details — but would still result in deficits exceeding $400 billion after 10 years — and is set for a vote Thursday afternoon.

The House measure also assumes that the upcoming tax bill won’t add to the deficit; the Senate version, however, would permit the measure to add $1.5 trillion to the $20 trillion-plus national debt over the coming 10 years. The final version is likely to stick closely to the Senate measure in key respects, including a $1.5 trillion deficit allowance for the tax rewrite measure. A final House-Senate agreement won’t come until November, Black said.

“That is certainly going to be a very lively discussion,” Black said of House-Senate talks. “Our members are concerned about (budget) balance and they’re also concerned about the debt and deficits.”

The real-world trajectory of Washington, however, is for higher deficits as Republicans focus on tax cuts, a huge hike in the defense budget, and a growing disaster aid tally that is about to hit $45 billion.

“The train’s left the station, and if you’re a budget hawk, you were left at the station,” said Rep. Mark Sanford, R-S.C.