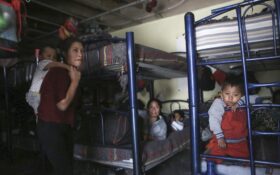 Illegal immigrants attempted to cross the U.S.-Mexico border at the highest level in two decades as the U.S. prepares for even larger numbers with the expected lifting of a pandemic-era order that turned away asylum seekers.

Immigration authorities stopped illegals 221,303 times along the Southwest border in March, a 33% increase from a month earlier, according to U.S. Customs and Border Protection data released Monday.

The new figures were disclosed as the Biden administration comes under increasing pressure over the looming expiration of the Trump-era public health order that enabled U.S. authorities to turn back most migrants, including people trying to claim asylum.

The number of illegal immigrant encounters has gone up nearly every month since President Joe Biden took office, becoming fodder for political opponents who point to the increase as evidence that this administration is far weaker on border security than its predecessor.

A backlog of people waiting outside the country to seek asylum, as well as dire economic and political conditions in much of Latin America and the Caribbean, is also partially responsible for the increase in illegals. Administration critics blame Biden, arguing his administration’s moves to roll back Trump-era policies have encouraged illegals to come.

The number of illegal crossings, or those outside official ports of entry, totaled 209,906 in March, surpassing the previous high of Biden’s presidency of 200,658 set in July, and the highest level since March 2000, when it reached 220,063.

Former President Donald Trump also faced a sharp increase in migrant border crossings but the number plummeted with the start of the pandemic. In March 2020, the previous administration invoked Title 42, a little-used public health authority to quickly expel nearly anyone encountered along the Southwest border.

U.S. authorities have expelled migrants more than 1.7 million times under Title 42 authority, named for a 1944 public health law, using the threat of COVID-19 to deny migrants a chance to seek asylum as required under U.S. law and international treaty.

With COVID-19 cases in decline, the Biden administration has said it intends to end the use of Title 42 at the border on May 23.

Several moderate Democrats have joined Republican leaders to call for an extension of Title 42 authority. Sen. Mark Kelly, an Arizona Democrat up for election this year, toured the border last week and warned that the Biden administration is unprepared for asylum restrictions to be lifted.

Liberal groups say the U.S. has a legal obligation to permit people to seek asylum and have called for the lifting of the public health order. “The United States can and must welcome people seeking asylum because it is the law, because it is right, and because we can,” the Catholic Legal Immigration Network said in a statement Monday to mark Holy Week.

The rapid expulsions under Title 42 are a significant component of the recent increases. Migrants are turned back without any legal consequences, and many simply try to cross again and are therefore counted more than once in the total.

CBP said the number of unique individuals encountered nationwide in March came to 159,900, a 37% increase from the prior month.

More than half of the total 221,303 stopped were quickly turned away, either to Mexico or their homelands, according to data supplied to a federal court in Texas as part of that state’s challenge of Biden administration immigration policies.

CBP Commissioner Chris Magnus said in a statement that the agency planned to send additional staff to the Southwest border to handle the “likely” increase expected when Title 42 is lifted.

Most of the rest were processed under immigration authority, known as Title 8, and their ultimate fate varies. About 34,000 were allowed to remain in the U.S. under parole, which will allow them to pursue asylum or legal residency through other avenues. If they are unsuccessful, they could face deportation.

Mexicans made up the largest group by nationality of those encountered at the border, followed by Cubans. The number of Ukrainians, who are generally being allowed into the country on humanitarian parole, increased to over 200 in March from just 5 in November.