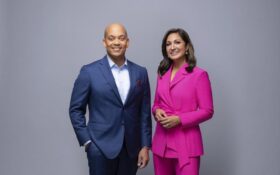 In what’s being portrayed as a generational change, PBS said Wednesday that Geoff Bennett and Amna Nawaz will replace Washington veteran Judy Woodruff as anchors of the weeknight “NewsHour” at the beginning of 2023.

Woodruff, 75, is leaving the daily anchor job that she’s been doing since 2013 and embarking on a two-year reporting project on the nation’s divisions. Her last show as anchor will be Dec. 30.

Nawaz, 43, has been Woodruff’s chief substitute since joining “NewsHour” in 2018. She’s won Peabody Awards for her reporting on the Jan. 6, 2021, insurrection and global plastic pollution, and previously worked at ABC and NBC News.

The 42-year-old Bennett became anchor of the weekend “NewsHour” earlier this year after jumping from NBC. The Washington reporter covered the White House and Congress for NBC and, prior to that, NPR.

“You can’t understate the importance of this moment,” Nawaz said. “It is an enormous change for an incredible institution that doesn’t do this change often. On that level, I think both of us understand very deeply what we are taking on.”

More buttoned-down than commercial TV, “NewsHour” reports on stories of the day along with deeper, magazine-style pieces. It was spoofed on a recent “Saturday Night Live” segment as “we’re what your grandma’s talking about when she says, ‘I saw this on the news.’”

The show is broadening its audience beyond the estimated 2 million viewers who watch on television each evening by taking an active presence on TikTok, Instagram and YouTube. “NewsHour” gets more than a million unique viewers each day on YouTube, according to Google Analytics and YouTube.

“There are few places these days that cover the fullness of American life, from hard news to feature stories, the way the ‘NewsHour’ does,” Bennett said.

PBS CEO Paula Kerger said the hirings also further the system’s effort to have the “NewsHour” broaden its focus beyond Washington news.

“One of the strengths of the public media system is we have these stations all across the country and we have been talking about ways to leverage that,” she said. There are 179 separate licenses for PBS outlets.

Having two anchors gives “NewsHour” more flexibility to use them as reporters who can travel for stories, said Sara Just, the show’s senior executive producer. Since its start in 1975, the show has used both single and co-anchors, essentially with just four people having occupied the role.

Robert MacNeil and Jim Lehrer co-anchored for two decades before MacNeil retired. Lehrer took it over alone and, after he left in 2011, Woodruff and Gwen Ifill started as regular co-anchors in 2013. Following Ifill’s death in 2016, Woodruff became sole anchor.

Woodruff, whose television career had included time at NBC News and two stints at PBS surrounding a stretch at CNN, said she felt like the midterm elections seemed like the right time to retreat. She recoils from an alliterative word: retirement.

“I honestly wanted to step away from the anchor desk at a point where I still have the energy and enthusiasm to do some reporting that really matters to me,” she said.

She plans a whopping week off before diving into “America at a Crossroads,” a two-year project examining the nation’s political and social divisions. She plans to talk with citizens and experts of all stripes, hoping to deliver suggestions to improve things.

Woodruff will be reporting what she finds regularly on “NewsHour,” building toward a special at the end.

Woodruff has been in the business long enough to experience blatant sexism and underestimation of women — and has been able to surmount it.

“If I’d had any role at all in seeing one woman, or one person of color who didn’t have a chance, if they’ve been able to look at the work that I’m doing and have confidence in themselves and their future and help them take the next step, I’m really proud of that,” she said.

She’s being replaced at the PBS anchor desk by a Black man and a first-generation American of Pakistani descent.

Nawaz recalls meeting a young woman recently who said she started watching “NewsHour” when she was home with her parents during the early days of the pandemic. Now the woman follows along regularly on social media.

“She said it ‘makes me feel so calm when I see you guys come up on the screen, because I feel like I can catch a deep breath and say ah. I’m about to get some information and I’m about to get it in a way that I’m ready to receive it,’” Nawaz said.

PBS would love it if she tells some friends.