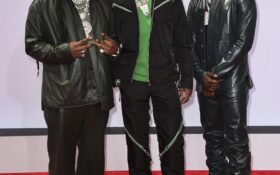 Police said they have few leads in the fatal shooting of rapper Takeoff outside a private party at a downtown Houston bowling alley.

The 28-year-old rapper was killed early Tuesday when gunfire erupted and also wounded another man and a woman, according to police Chief Troy Finner.

Most of the 40 people who attended the party at 810 Billiards & Bowling fled when the gunshots rang out, Finner said. That left police asking people to come forward and give statements and videos to investigators on what they saw and heard, even if anonymously, Mayor Sylvester Turner said.

At least two people discharged firearms, according to Finner. The two others who were struck by gunfire had non-life-threatening wounds and went to hospitals in private vehicles, he said.

“Let me just ask … that anyone who has information on the shooter or shooters to provide that information to HPD and let us solve this situation,” Turner said at a news conference Tuesday. “Let us bring justice to this family.”

Finner said Takeoff was “well respected,” and there was “no reason to believe he was involved in anything criminal at the time.”