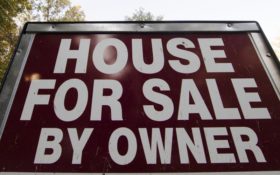 Yet sales have fallen 1.5 percent from a year ago, the first year-over-year decline since July 2016. That’s because so few homes are for sale, particularly at lower prices. Buyers have bid up housing costs: The median home price rose to $245,100, up 4.2 percent from a year ago. That’s faster than wage gains.’

“It’s simply impossible to sell more homes when the number of homes for sale keeps falling,” said Svenja Gudell, chief economist for housing data provider Zillow. “And the parts of the market most in need of more homes for sale, the low-to-middle segments, are also those experiencing the biggest inventory shortfalls.”

Home construction has been slowed by a shortage of available workers, developers say. Home construction fell 4.7 percent last month, partly because of the hurricanes. And many home owners are reluctant to sell with so few other houses available, creating a vicious cycle.

New construction may slow even more in the coming months, keeping inventories low, the Realtors said. Construction workers — and building materials such as lumber — are being diverted to repair and rebuilding work in the aftermath of the storms and the wildfires in California. That should slow new home building and limit the number of homes for sale.

Employers are hiring and mortgage rates remain low, which typically would lift sales. But the number of affordable homes available is falling sharply, according to data from real estate brokerage Redfin. It calculates that the number of newly-listed homes for less than $260,000 plunged 14.9 percent last month from a year ago. New listings priced between $260,000 and $470,000 fell 4.7 percent.

Only homes priced above $470,000 — the most expensive one-third of the market — saw listings actually increase, by 2.3 percent.

The number of homes for sale sank 6.4 percent from 12 months ago to 1.9 million homes, the fewest in any September since the Realtors began tracking the number in 2001.

In Houston, sales rose 4 percent from a year ago after plunging 25 percent in August. Lawrence Yun, chief economist for the Realtors’ group, said some of that gain may reflect investors purchasing damaged properties.

In Florida, Hurricane Irma sharply lowered sales last month, which were 22 percent lower than a year ago, the Realtors said.

“The housing market is running on fumes due to low inventory,” said Redfin chief economist Nela Richardson. “The inventory shortage is most severe for affordable homes. There has not been an increase in homes priced under $260,000 in two years.”