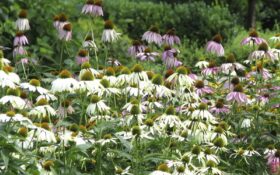 The season has come when many home gardeners, their numbers booming since the pandemic began, are being rewarded with fully matured, ready-to-pick vegetables and flowers. It’s also vacation season, and this summer travel is back.

How do you maintain your garden and take advantage of all that homegrown goodness during extended trips away? Even experienced gardeners can end up with more tomatoes, beans and zucchini than they’d expected come late summer.

Garden sitters are one answer.

Some home gardeners hire professionals, while many just rely on neighbors and hope for the best.

“It’s really hard to leave the garden,” said Theresa Fiumano-Rhatigan, a longtime home gardener in Brooklyn. She relies on her parents and other nearby relatives as garden sitters during her five weeks each summer in Cape Cod, Massachusetts. “Nobody does it quite like I do.”

Having an experienced sitter who isn’t afraid to take control can help. Avoid a free-for-all of inexperienced neighbors and friends traipsing through to pick what they want with no care given to the plants and no idea when to water.

“The first thing is to find one friend with a garden you like and make sure you’re willing to return the favor,” said Adam Choper, associate director for outdoor gardens and sustainable horticulture at the New York Botanical Garden in the Bronx.

He suggests walking your garden sitter through the process beforehand to make sure things are done just right. Setting up sprinklers or soaker hoses will make things easier while you’re away. For container gardens, group the containers together in the shade so your plants won’t dry out as quickly if your vacation is just a week or two, Choper said. Some gardeners place containers in kiddy pools with water that a garden sitter need only fill up if necessary.

Choper also recommends putting down mulch before heading out for long periods. That helps the soil conserve water and keeps weeds at bay.

For gardeners without trusted neighbors or loved ones, garden sitters for hire are abundant on local online message boards or at nurseries and horticultural societies.

Rachel Mulkerin tends to about 3,000 square feet of garden space on her 9-acre property in Sherman, Connecticut, and has hired special needs helpers she found through her mother, a former adult education teacher.

Mulkerin uses about half of what she produces for herself and her family and gives away the rest to those in need in her community.

Through time, gardens have offered a sense of safety and comfort, so entrusting them to others can be difficult, said Ambra Edwards, a gardening historian and co-author of “The Story of Gardening.”

Edwards, who gardens herself in England’s rural Dorset, considers holiday a reprieve from the toil, but she knows a lot of manic gardeners who can’t tear themselves away.

“I’ve got one friend in particular and she has to travel a lot. She travels the length and breadth of the country. And when she does, she takes all her vegetable plants, all her sweet peas and a particular myrtle in a pot that she got from a very dear friend, now deceased, and loads them in the car. They go with her. She’s the snail carrying a house,” Edwards said.

Gardeners, generally speaking, are sharers, and sharing vegetables while away not only produces more after picking, but also avoids rotting tomatoes and other crops.

“Rotten tomatoes will cause other tomatoes to rot, and they’re also really smelly,” Choper said.

Some vegetables, like cucumbers and zucchini, need to be picked so they don’t grow into monsters that aren’t as pleasant to eat.

A designated garden sitter can take what they want and leave the rest on a front porch or at the end of a driveway after putting out the word of free fresh food.

Heather Grabin in Hampton, New Jersey, has 10 garden plots on her 40-acre property. She also owns a cafe in a city an hour away that doesn’t have access to much fresh produce. She uses her vegetables and herbs at her restaurant, and sells some of her excess there at low cost.

Grabin had to delay a three-week trip to California this year because of a new school schedule for her two kids. By the time she and her family left, her tomatoes and zucchini were abundant. With such an overwhelming amount, she went the hired garden sitter route.

“It’s different when you’re doing it yourself versus when you have to ask someone else to do it for you,” she said. “He’s been flash freezing everything. It’s a lot.”

Doug Guttenberg and his wife, Tal, grow herbs in their backyard and vegetables in a community garden plot just a few minutes from their Brooklyn home. They also own a house in Detroit and spend a month in Michigan every summer. They entrust their Brooklyn plants to a neighbor, a fellow gardener, and know firsthand what happens without a sitter after choosing to forgo one last year.

“When we came back, the cucumbers had attacked everything,” Tal said. “It was like this tornado of cucumbers. It was a bit crazy, and they didn’t even fruit. I mean, no cucumbers came of it.”