House with Caravaggio ceiling goes up for auction - The Horn News 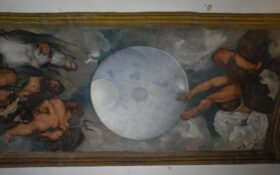 A Rome villa containing the only known ceiling painted by Caravaggio is set to go on a court-ordered auction block Tuesday, thanks to an inheritance dispute pitting the heirs of one of the Italian capital’s aristocratic families against their step-mother, a Texas-born princess.

Princess Rita Jenrett Boncompagni Ludovisi, formerly known as Rita Carpenter, woke up Tuesday morning in the Casa dell’Aurora surrounded by her dogs, as usual, on what might be the last day that her home of nearly two decades is actually hers.

An online auction organized by the Rome tribunal is planned to start at 3 p.m. sharp. The starting bid is set at 353 million euros ($400 million), and the villa just off the famous Via Veneto has an value of 471 million euros ($533 million).

“It’s been emotional since I received the notice from the judge on Sept. 2. I’ve rarely slept,” Boncompagni Ludovisi told The Associated Press in one of her sitting rooms a few hours before the auction began. “It’s like going through the stages of death and dying. … You’re angry at first, and then you can’t believe it, and then you finally go into a point of accepting it.”

The house, built in 1570, has been in the Ludovisi family since the early 1600s. After Prince Nicolo Boncompagni Ludovisi died in 2018, the villa became the subject of an inheritance dispute between the children from his first marriage and his third wife, Princess Rita.

The villa, also known as Villa Ludovisi, is one of 42 lots up for court-ordered auction Tuesday, alongside some garage slots (valued at 4,000-7,000 euros each) and other residential properties.

But Villa Aurora is by far the most prestigious and expensive, thanks in great part to the Caravaggio that graces an otherwise nondescript room off a spiral staircase leading to the second floor.

It was commissioned in 1597 by a diplomat and patron of the arts who asked the then-young painter to decorate the ceiling of a small room being used as an alchemy workshop. The 2.75-meter (9-foot) wide mural, which depicts Jupiter, Pluto and Neptune, is unusual: It’s not a fresco, but rather oil on plaster, and represents the only ceiling mural that Caravaggio is known to have made.

The listing on the Rome tribunal’s auction site highlights the Caravaggio among the home’s attributes but notes the villa will need an estimated 11 million euros ($12.5 million) in renovations to comply with current standards.

The “monumental property” on six levels is “among the most prestigious architectural and landscape beauties of pre-unification Rome,” with three garages, two roof terraces and a “splendid garden with arboreal essences and tall trees, pedestrian paths, stairs and rest areas,” the listing states.

With such an astronomical price tag, it’s quite possible no one will bid on it. Boncompagni Ludovisi said would-be buyers came to look at the property over several weeks. She is not allowed to reveal their identities, and the new owner – if one emerges – may not be known until a later date.

If no bids are made in the first round, the villa will go up for auction two more times at lower prices, Boncompagni Ludovisi said. The Italian Culture Ministry can try to match the highest bid at any stage given the property’s value as a part of Italy’s cultural heritage.

The American princess, who previously was married to former U.S. Rep. John Jenrette Jr. of South Carolina, married Boncompagni Ludovisi in 2009. At the time, the villa had fallen into disrepair, and her husband only used it as an office.

Together, they tried to renovate it as best they could, she said. They opened the house up to visiting students and tour groups, hosted dinners to bring in revenue and arranged for the family’s archive to be digitized.

“I had always wanted to turn it into a museum, actually, but that’s not going to happen, I presume,” Boncompagni Ludovisi said. “So my hope is that whomever buys it will treat it with the care and love that my husband and I did.”