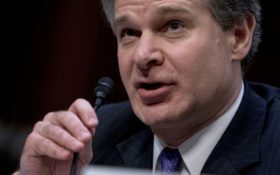 Lawmakers on Capitol Hill want to know how former presidential aide Rob Porter was allowed to work at the White House under an interim security clearance — despite allegations of spousal abuse.

Rep. Trey Gowdy, R-S.C., chairman of the House Committee on Oversight and Government Reform, sent letters to the FBI and White House on Wednesday as his panel opened an investigation into the matter. Porter, the president’s staff secretary, resigned last week after his two ex-wives came forward with allegations of abuse.

House Speaker Paul Ryan was asked Wednesday about how the White House has handled the Porter allegations, and whether President Donald Trump needs to publicly condemn domestic violence.

Ryan’s comments and word of the House probe come a day after the FBI contradicted the White House over the Porter accusations. The FBI said it gave the Trump administration information on multiple occasions last year about Porter and that the investigation wrapped up in January.

That account by FBI Director Christopher Wray challenged the White House assertion that Porter’s background “investigation was ongoing” and officials first learned the extent of accusations against him only last week, just before he abruptly resigned.

Wray’s testimony on Tuesday marked the latest development in a scandal that has called into question the judgment of senior members of the White House staff, put new stress on the administration’s already strained credibility with the public, and drawn accusations of tone-deaf handling of abuse allegations.

The weeklong fallout from the allegations against Porter has thrown the West Wing into chaos not seen since the earliest months of the administration and has sparked new rounds of recriminations inside the White House.

Privately, officials acknowledge that the public timeline offered last week — that the administration first learned of the ex-wives’ charges against Porter last Tuesday — was flawed at best.

Kelly found out after requesting an update on the large number of senior staffers operating without full security clearances, according to a senior administration official who spoke on condition of anonymity to discuss internal discussions. McGahn told Kelly last fall there was concern about information in the background investigation involving Porter’s ex-wives, the official said, and Kelly expressed surprise that Porter had previously been married.

Despite that, Porter took on an increasingly central role in the West Wing and was under consideration to serve as Trump’s deputy chief of staff, two officials said.

White House press secretary Sarah Huckabee Sanders told reporters Monday, “The White House had not received any specific papers regarding the completion of that background check.” Yet Wray testified that the FBI sent the White House its preliminary report in March 2017 and its completed investigation in late July. Soon after that, the agency received a request for a follow-up inquiry, and it provided that information in November. Porter was interviewed about the allegations in September, an official said.

“And then we administratively closed the file in January, and then earlier this month we received some additional information and we passed that on as well,” Wray added in his congressional testimony Tuesday, without elaboration.

The FBI does not make recommendations about whether to grant or deny a security clearance, officials said, leaving the determination up to the employee’s agency, in Porter’s case, the White House.

Sanders maintained Tuesday that her statement about an ongoing investigation was accurate because Porter’s clearance hadn’t received a final sign-off from the White House Office of Personnel Security.

“We find those statements to be consistent with one another,” she said.

The White House has refused to divulge the number of staff members who still do not have full clearances, though the list includes Jared Kushner, the president’s senior adviser and son-in-law. Kushner’s attorney, Abbe Lowell, said in a statement that “there are a dozen or more people at Mr. Kushner’s level” who are working without full security clearances.

A senior administration official said as many as two dozen senior officials don’t hold permanent clearances. The official wasn’t authorized to discuss the matter and spoke on the condition of anonymity.

Separately, Trump’s intelligence chief called for top-to-bottom reform of the security clearance process, which allowed Porter to operate in his job for more than a year with only an interim clearance.

“We have a broken system and I think everybody’s come to agree with that now,” Dan Coats, the director of national intelligence, told The Associated Press. He called for limits on the information made accessible to those with temporary clearances — a practice that is currently not followed in the West Wing, an official said.

Conway, in a weekend interview on CNN, said she had no reason to disbelieve accounts by Holderness and another ex-wife that Porter had abused them. But when asked if she was concerned for top White House aide Hope Hicks, who reportedly was dating Porter, Conway said no because “I’ve rarely met somebody so strong with such excellent instincts and loyalty and smarts.”

Conway went on to say that “there’s no question” that domestic violence “knows no demographic or geographic bounds,” and she understands there is a stigma that surrounds these issues.

In an opinion piece in The Washington Post, Holderness wrote that Conway’s first statement “implies that those who have been in abusive relationships are not strong. I beg to differ.”

Porter resigned after Holderness and his second ex-wife, Jennifer Willoughby, came forward with allegations of emotional and physical abuse. Porter has denied harming them.

The White House approach has drawn criticism even from Trump’s own party.

“I think you can’t justify it,” Iowa Sen. Joni Ernst told CNN about a report that the White House arranged for Porter to defend himself privately to reporters after the allegations surfaced. “You can’t justify that.”