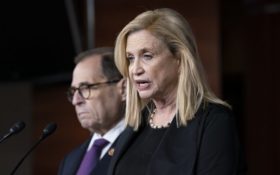 Maloney defeated Virginia Rep. Gerry Connolly by a 133-86 vote in a secret ballot among the full Democratic caucus. She succeeds the late Rep. Elijah Cummings of Maryland, who died last month.

As Oversight chief, Maloney, 73, will play a key role in the impeachment inquiry of President Donald Trump.

The committee has a broad portfolio, including oversight of the Trump administration’s handling of the census and immigration matters, as well as investigations into Trump’s business dealings and security clearances granted to White House officials.

Oversight is among the committees handling the impeachment inquiry, although the most visible one is the House Intelligence Committee, whose chairman is Rep. Adam Schiff, D-Calif.

Maloney, who lost out to Cummings as the committee’s top Democrat nearly a decade ago, is the panel’s longest-serving Democrat, having joined the committee in 1993. She has led the committee on an acting basis for the past month.

In a statement Wednesday, Maloney said she is “deeply humbled and grateful to my colleagues for entrusting me with the chairmanship.’’

She pledged to do her best to “follow the honorable example that Chairman Cummings left for us all. There’s much work to be done, and I can’t wait to get started.’’

House Speaker Nancy Pelosi called Maloney “a deeply respected and battle-tested leader” who has been a force for progress for decades.

“She brings outstanding legislative experience and knowledge of the workings of Congress that will strengthen the Oversight Committee’s work at this critical time in our nation’s history,’’ Pelosi said, adding that she is confident Maloney’s leadership “will help ensure that Congress can function as our founders intended, as a co-equal branch acting as a check and balance on the others.’’

Maloney is in her 14th term representing a district that includes much of Manhattan, including Trump Tower. She is best known for her years of advocacy for victims of the Sept. 11, 2001, attacks and famously wore a New York firefighter’s jacket at the Capitol and even at the Met Gala until she could secure permanent authorization for a victims’ fund. A measure making the 9/11 fund permanent was a rare example of a bipartisan bill signed into law earlier this year.

Maloney has promised to continue the robust oversight agenda begun by Cummings after Democrats assumed the majority this year. In a letter to colleagues, she touted her work helping to remove the citizenship question from the 2020 census, promote the Equal Rights Amendment and to introduce bills to guarantee paid family leave for federal employees.

Connolly, 69, congratulated Maloney on her election, noting in a statement that Oversight “has a consequential responsibility in the next year to bring transparency and accountability to the Trump administration for the American people.’’ He said Maloney has his full support.

Maloney also serves on the House Financial Services Committee, reflecting the importance of the financial industry in her district. She agreed to give up her role leading a subcommittee on investor protection and capital markets if elected to head Oversight.