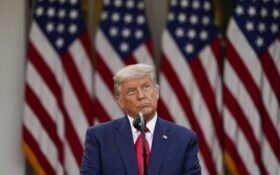 One week later, the Ways and Means Committee has yet to release the records… and it’s running out of time.

The committee has already released some summaries of his tax returns. However, it’s still holding onto the primary sources.

The House has already missed that mark. Insiders told Manriquez that the House has moved the deadline to Friday, Dec. 30.

The committee is running out of time.

The Republicans will retake the House on Jan. 3, exactly a week from Tuesday, and the’ve expressed aversion to releasing the records.

So, the Democrat-controlled committee needs to act before Jan. 3.

Before releasing the records, the committee will likely redact sensitive data — like Trump’s account numbers — and these lawmakers are taking their sweet time.

Legally, presidents can keep their tax returns private, but since the 1970s every president has released his own tax returns.

It remains unclear whether this tradition will continue beyond Joe Biden’s presidency.

On Thursday, the House passed the Presidential Tax Filing and Audit Transparency Act, a move to make all future presidents release their tax returns.

However, the Senate still needs to pass the bill in order to send it to Biden’s desk, and the Senate has already adjourned for the rest of this congressional term.

The Senate may debate the bill during the next term, but the House will have changed hands by then, with the GOP set to exercise a majority for the next two years.

Congress has split down party lines when discussing this issue.

The Republicans have accused the Democrats of selectively enforcing this 50-year tradition.

“This unprecedented leak by lameduck Democrats is proof they are playing a political game they are losing,” Trump’s spokesman Stephen Cheung said in a statement to Newsweek earlier this month.

“If they are so hell-bent on releasing President Trump’s tax returns—which show he built a very successful business and created numerous lucrative assets throughout his career—they should release the tax returns of Nancy Pelosi.”

Meanwhile, the Democrats have accused the Republicans of politically motivated cuts to the IRS.

“First, the IRS was asleep at the wheel, and the presidential audit program is broken. There is no justification for the failure to conduct the required presidential audits until a congressional inquiry was made. I have additional questions about the extent to which resource issues or fear of political retaliation from the White House contributed to lapses here,” Senate Finance Committee Chair Ron Wyden, D-Ore., said in a statement.”

“Second, Donald Trump’s tax returns exemplify the shortcomings of our tax code and consequences of Republicans’ decades-long fight to gut the IRS.”