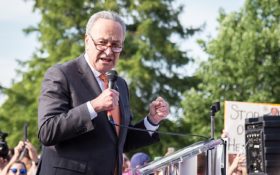 When Sen. Chuck Schumer, D-N.Y. agreed to fund $4.6 billion to the southern border wall, he probably thought he’d be praised for reaching across the aisle and compromising with GOP lawmakers.

Rep. Alexandria Ocasio-Cortez, D-N.Y. and far-left Democrats, though, ripped Schumer in the media.

The Bronx congresswoman is upset that Schumer negotiated with Senate Majority Leader Mitch McConnell, R-K.Y., and didn’t invite her. Schumer never gave Ocasio-Cortez a call about the deal — and she’s “livid” about it.

Earlier this year House Speaker Nancy Pelosi, D-Calif. and her band of radical liberals made a political circus out of the illegal immigration. They refused to acknowledge the border crisis, and wouldn’t fund the contruction of the U.S.-Mexico wall.

Now they’re singing a different tune. Schumer and the gang have quietly agreed to hand over the money Republicans requested. It’s proof that rank and file Democrats knew all along that illegal immigration was a national emergency.

They just didn’t want to admit it publicly.

Progressives are furious that Schumer made the deal without their input.

Politico reportedly spoke with a senior Democratic aide, who claimed “Schumer threw all of [the] House Democrats under the bus and he will pay a heavy price for that.”

Ocasio-Cortez is the one leading the revolt. The far-left congresswoman took to Twitter to complained she felt burned by the Senate Democrats.

We have time. We can stay in town. We can at LEAST add some amendments to this Senate bill. But to pass it completely unamended with no House input? That seems a bridge too far.

Ocasio-Cortez is facing the reality that Schumer and leading Democrats never wanted her at the bargining table to begin with.

Nearly three full years into Trump’s presidency, many congressional members are growing restless with the far-left Democrats’ refusal to work with conservative leadership.

Now, Ocasio-Cortez says Schumer should watch his back.

Progressive Democrats have a bone to pick with him.