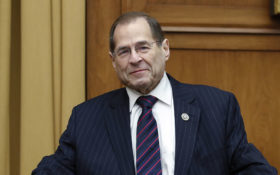 The resolution coming up for a vote Thursday would authorize subpoenas for documents and testimony from 12 people in all, also including former national security adviser Michael Flynn, former White House chief of staff John Kelly and former Deputy Attorney General Rod Rosenstein.

Lawmakers will also be voting on subpoenas for documents and testimony on the Trump administration’s handling of immigration, including the abandoned “zero tolerance” approach of separating migrant families at the southern border. The resolution authorizes an investigation into whether there have been any discussions of Trump offering pardons to Homeland Security officials who work on immigration issues.

Judiciary Chairman Jerrold Nadler, D-N.Y., will make the final decision about issuing the subpoenas. He said they will only be avoided if the information is provided voluntarily.

The Judiciary panel is investigating whether Trump obstructed justice after Mueller’s report detailed several episodes in which Trump tried to influence his investigation. Mueller said he could not indict Trump on obstruction and said there was no evidence of collusion. Despite asking to be left alone, Mueller is being compelled by Democrats to testify to Congress next week.

Democrats have had little luck so far finding anything beyond what Mueller detailed in his exhaustive, 2-year, 448-page report. The White House has blocked several witnesses from answering questions. It’s unclear if they would have better luck with the latest group of witnesses, as most worked for the White House or the administration.

Republicans have fought the Democratic efforts to investigate obstruction, saying the issue should be laid to rest after the Mueller report.

“Even if Chairman Nadler still believes subpoenas are conversation starters, it’s hard to imagine this handful of subpoenas will do anything but reinforce the principal conclusions we’ve been able to read about for months,” Collins said.