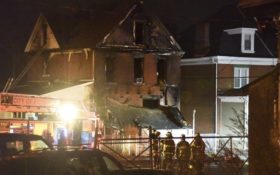 An improvised method of getting rid of a snake in a garden by spraying it with gasoline kicked off a chain reaction that ended up with a house on fire in southern Finland.

Finnish public broadcaster YLE reported Tuesday that some of the flammable liquid spread by an ill-fated homeowner in Siuntio, west of Helsinki, landed on a nearby lawnmower that was warm enough to ignite a fire.

The broadcaster said firefighters extinguished the blaze but damages may reach 15,000 euros ($17,000), although the home’s interior was not affected.

YLE didn’t identify the reptile, but venomous adders, smooth snakes and grass snakes are the most common types of snakes in Finland.