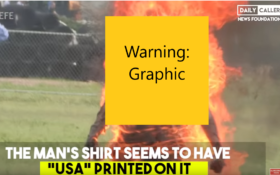 A Maryland man who set himself on fire at a national park near the White House has died.

Police say officers and U.S. Secret Service agents responded to a report of the burning man earlier on the Ellipse that afternoon and extinguished the flames. Gupta was hospitalized in critical condition.

Montgomery County, Maryland, police said earlier Wednesday that investigators were searching for Gupta and were concerned for his welfare.

They said he was last seen alive that morning when he left his Bethesda-area home.

You can watch video of the incident below: