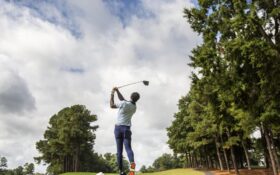 J.R. Smith stepped into a hornets nest in his first college golf tournament and it had nothing to do with his high score.

The 36-year-old two-time NBA champion was literally stung by hornets while completing his round Tuesday for North Carolina A&T on the second day of Elon’s Phoenix Invitational.

“To get stung on the basketball court or in an arena, never happens,” said Smith, now a freshman walk-on. “That’s one of the very few things you don’t have to worry about (in basketball) – other animals. When I got stung, I was like ‘No way.’”

The hornets just added to the sting of Smith’s birdie-less round of 8-over-par 79 on the Donald Ross-designed layout. Combined with his two rounds Monday, he finished at 29 over 240 – in 81st place out 84 entries.

Smith said he’s determined to improve because he knows others are paying attention. He communicated with Phoenix guard Chris Paul after Monday’s two rounds and heard from ex-NBA teammates as part of a group text.

“I got a lot of great feedback,” Smith said. “Chris Paul was telling me guys were talking about it in the locker room. Guys are really looking for my scores, so I got to take care of business so when I see them it ain’t going to be too much backlash.”

Still, he made an impact at the event. Well after the round, playing partner Mason Whatley of Presbyterian went to have a photograph with Smith.

“He has made golf cool for people,” Whatley said.

When the hornets attacked, being an ambassador for the game was not Smith’s top priority.

It happened on his third hole of the third round at Alamance Country Club. His tee shot went off the fairway and became embedded in pine straw. He found the ball, but his pull cart’s wheel rolled over the the nest.

Smith darted away from that area, waving his arms, before needing treatment. Smith, along with playing partners Florian Blatti of George Washington and Whatley, were granted a 15-minute break as other groups played through.

“I tried to turn it into a positive,” Smith said, referring to suiting up while ill in the NBA. “This might be your equivalent of a flu game.”

Smith had the sixth-best score out of six players on his team. The Aggies finished 11th in the 13-team field, 57 shots off the pace set by tournament champion Elon.

Smith played 16 years in the NBA, winning championships with Cleveland in 2016 and with the Los Angeles Lakers last year in the Florida pandemic bubble. The Lakers’ title-clinching win came exactly one year before his debut as an Aggies golfer.

Smith said he has a round tentatively set up next week with recently retired North Carolina basketball coach Roy Williams. Smith was originally set to play basketball for Williams’ Tar Heels before going jumping straight to the NBA in 2004.