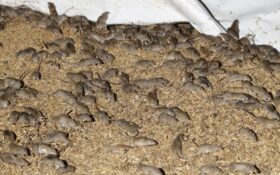 At night, the floors of sheds vanish beneath carpets of scampering mice. Ceilings come alive with the sounds of scratching. One family blamed mice chewing electrical wires for their house burning down.

Vast tracts of land in Australia’s New South Wales state are being threatened by a mouse plague that the state government describes as “absolutely unprecedented.” Just how many millions of rodents have infested the agricultural plains across the state is guesswork.

“We’re at a critical point now where if we don’t significantly reduce the number of mice that are in plague proportions by spring, we are facing an absolute economic and social crisis in rural and regional New South Wales,” Agriculture Minister Adam Marshall said this month.

Bruce Barnes said he is taking a gamble by planting crops on his family farm near the central New South Wales town of Bogan Gate.

The risk is that the mice will maintain their numbers through the Southern Hemisphere winter and devour the wheat, barley and canola before it can be harvested.

NSW Farmers, the state’s top agricultural association, predicts the plague will wipe more than 1 billion Australian dollars ($775 million) from the value of the winter crop.

The state government has ordered 5,000 liters (1,320 gallons) of the banned poison Bromadiolone from India. The federal government regulator has yet to approve emergency applications to use the poison on the perimeters of crops. Critics fear the poison will kill not only mice but also animals that feed on them. including wedge-tail eagles and family pets.

“We’re having to go down this path because we need something that is super strength, the equivalent of napalm to just blast these mice into oblivion,” Marshall said.

The plague is a cruel blow to farmers in Australia’s most populous state who have been battered by fires, floods and pandemic disruptions in recent years, only to face the new scourge of the introduced house mouse, or Mus musculus.

The same government-commissioned advisers who have helped farmers cope with the drought, fire and floods are returning to help people deal with the stresses of mice.

The worst comes after dark, when millions of mice that had been hiding and dormant during the day become active.

By day, the crisis is less apparent. Patches of road are dotted with squashed mice from the previous night, but birds soon take the carcasses away. Haystacks are disintegrating due to ravenous rodents that have burrowed deep inside. Upending a sheet of scrap metal lying in a paddock will send a dozen mice scurrying. The sidewalks are strewn with dead mice that have eaten poisonous bait.

But a constant, both day and night, is the stench of mice urine and decaying flesh. The smell is people’s greatest gripe.

“You deal with it all day. You’re out baiting, trying your best to manage the situation, then come home and just the stench of dead mice,” said Jason Conn, a fifth generation farmer near Wellington in central New South Wales.

“They’re in the roof cavity of your house. If your house is not well sealed, they’re in bed with you. People are getting bitten in bed,” Conn said. “It doesn’t relent, that’s for sure.”

Colin Tink estimated he drowned 7,500 mice in a single night last week in a trap he set with a cattle feeding bowl full of water at his farm outside Dubbo.

“People are getting sick from the water,” he said.

The mice are already in Barnes’ hay bales. He’s battling them with zinc phosphide baits, the only legal chemical control for mice used in broad-scale agriculture in Australia. He’s hoping that winter frosts will help contain the numbers.

Farmers like Barnes endured four lean years of drought before 2020 brought a good season as well as the worst flooding that some parts of New South Wales have seen in at least 50 years. But the pandemic brought a labor drought. Fruit was left to rot on trees because foreign backpackers who provide the seasonal workforce were absent.

Disease and a shortage of food are thought to trigger a dramatic population crash as mice feed on themselves, devouring the sick, weak and their own offspring.

Government researcher Steve Henry, whose agency is developing strategies to reduce the impact of mice on agriculture, said it is too early to predict what damage will occur by spring.

He travels across the state holding community meetings, sometimes twice a day, to discuss the mice problem.

“People are fatigued from dealing with the mice,” Henry said.

You can view photos of the mice below: 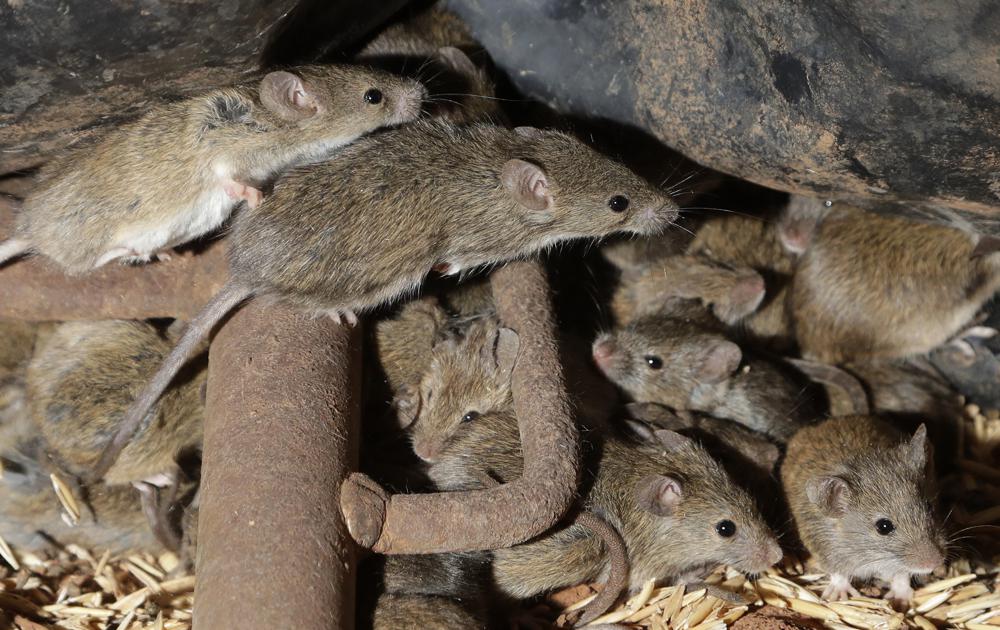 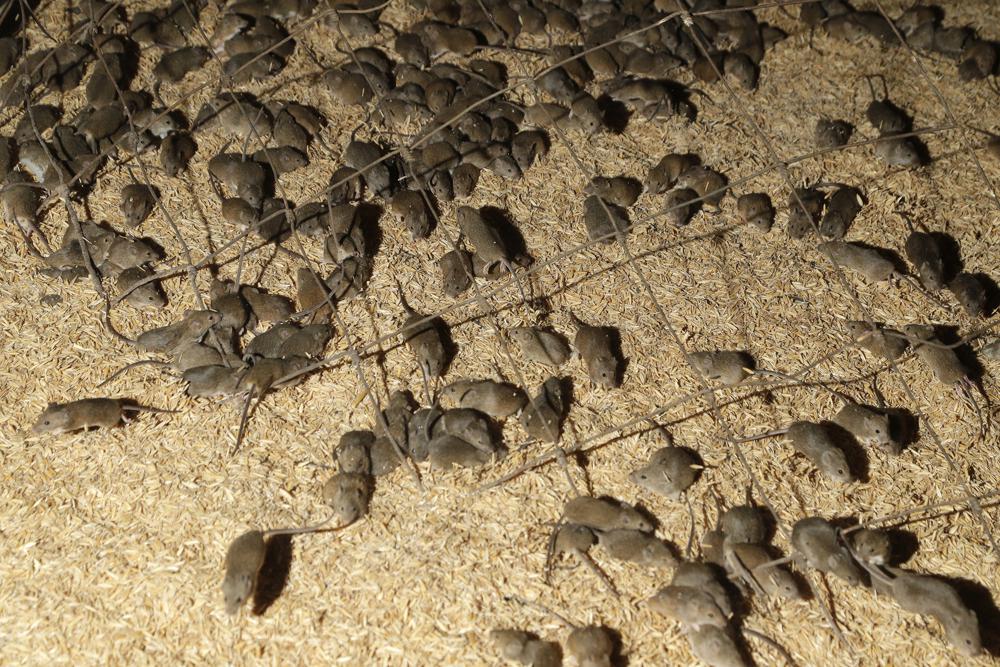 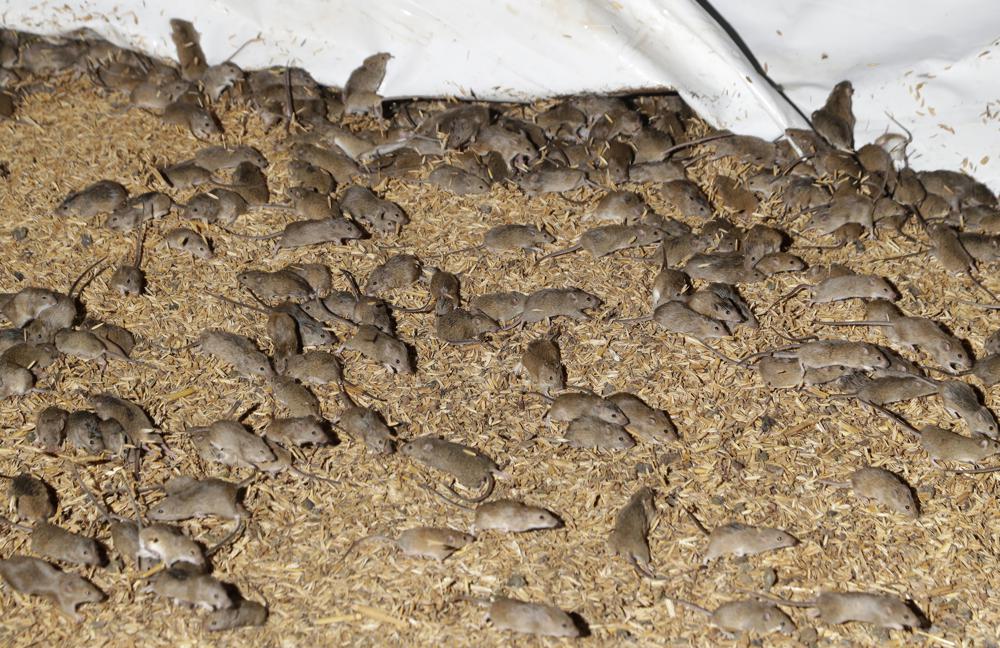