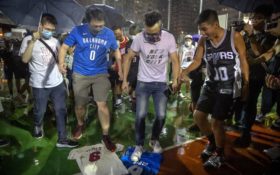 When the ball smashed into a photo of LeBron James’ face stuck above the hoop and dropped into the basket, the Hong Kong protesters cheered.

His standing took a hit from basketball fans who gathered on courts amid Hong Kong’s high-rise buildings Tuesday to vent their anger at the NBA’s biggest star.

They chanted support for Houston Rockets general manager Daryl Morey, a bit of a hero in the semi-autonomous Chinese territory for tweeting support of their struggle against China. What the crowd of approximately 200 people chanted about James wasn’t printable.

The Los Angeles Lakers superstar triggered their anger with comments suggesting that free speech can have negative consequences. That touched a nerve among protesters in Hong Kong who have been engaged in an effort to defend their freedoms for months.