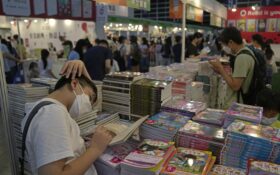 Hong Kong’s annual book fair kicked off Wednesday, with several publishers of political books prevented from taking part in the fair and others saying they had to be cautious about what they exhibited.

The fair’s main organizer, the Hong Kong Trade Development Council, said it did not screen the books for sale at the fair. But Hong Kong authorities have tightened controls on freedom of expression and arrested dozens of pro-democracy activists after a tough national security law took effect in 2020, and the council stressed that exhibitors must abide by the law.

Independent publisher Hillway Culture, which publishes books on Hong Kong and political events, was among those not allowed to participate. Another publisher, One of a Kind, which has published several books about 2019 protests in the city, was another.

Publishers are having a tough time given the impact of the pandemic on the city’s economy and concerns over censorship and rejection of independent publishers, said Kaying Wong, a guest curator at The House of Hong Kong Literature, the city’s largest literary organization.

“It’s surely not an easy job for us to set up a booth in the book fair and be selected (to exhibit),” Wong said.

The book fair is one of the largest in Asia. In past years, it was known for exhibiting a variety of books, including politically sensitive ones and those banned on the communist-ruled Chinese mainland.

In 2020, the city postponed the fair several times due to the pandemic. The event finally was held in person last June after a one-year hiatus. This year’s book fair runs from Wednesday until Tuesday, July 26.

Novelist Gabriel Tsang, who works with publisher Spicy Fish Cultural Production Limited, said writers have to consider whether they can get published in the current environment.

“I guess many writers have their own intentions … and they have to think a lot about whether they can have work published. They may use some allegory or use many rhetoric skills, rather than directly expressing what they wanted to express originally,” he said.

Last year, complaints were lodged against Hillway Culture, one of the publishers rejected this year, for exhibiting politically sensitive books that could be seen as violating the national security law.

“Last year, we had (exhibited) political books in the book fair and this was also the case for another publisher that was banned,” said Raymond Yeung, Hillway Culture’s founder. He was one of the few publishers allowed to exhibit political books about Hong Kong at last year’s book fair.

Yeung attempted to set up an independent book fair as an alternative to the main fair earlier this month but had to cancel that after the landlord of the venue accused Hillway of violating its tenancy contract by subletting its space to other publishers.

The authorities ought to be clearer and more transparent about what kinds of activities are allowed, said Hui Ching, research director of the policy think tank Hong Kong Zhi Ming Institute.

“If there’s no transparency, it’s reasonable for citizen to suspect their rights being deprived,” Hui said.

Visitors still value the fair as an opportunity to browse and purchase a wide range of books.

“I read as a habit and today I’ve come to look for some Chinese novels and short stories that I’m interested in,” said Grace Ng, a 22-year-old university student who visited the fair with her boyfriend.

Ng usually attends the annual fair and said this year’s appeared somewhat subdued. “It’s not as crowded now as before the pandemic,” she said.