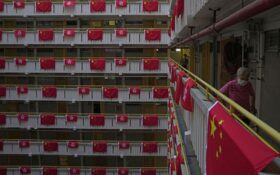 Hong Kong authorities, citing “security reasons,” have barred more than 10 journalists from covering events and ceremonies this week marking the 25th anniversary of Hong Kong’s return to China, according to the Hong Kong Journalists Association.

The journalists represent at least seven media outlets, including international news agencies Reuters and Agence France-Presse and others from Hong Kong, the association said in a statement posted online late Tuesday.

“The authorities have made ad hoc and narrow interview arrangements at this important juncture and have put forth vague grounds for refusal, seriously undermining the freedom of the press in Hong Kong,” the statement read.

The rejections come amid strict requirements for those attending the July 1 events. Journalists covering the events must have daily COVID-19 nucleic acid tests starting last Sunday and stay in a quarantine hotel from Wednesday.

A news report by Hong Kong Economic Journal said at least three other journalists from local news outlets were informed Wednesday that their applications to cover the events had been rejected.

Despite receiving approvals that had instructions for checking in to the quarantine hotel, some received rejection notices on Wednesday while on their way to the hotel, while others were informed that they were barred from the events upon arrival.

Authorities had invited media outlets to submit up to 20 applications to cover the events — which include a flag-raising ceremony and the inauguration for the new Hong Kong government — but later specified that only one journalist from each outlet could be sent to cover each of the two events.

Reuters said in a news report it had put forward two journalists’ names to cover the events, and that both applications were rejected.

The affected media organizations were invited to send other journalists to cover the event, but the replacements must also meet the quarantine and testing requirements, according to the journalist association’s statement.

The Information Services Department, which sent out the initial invites to media outlets informing them to register to cover the event, declined to provide information on how many journalists were given accreditation and also did not comment on an SCMP news report that said one of its own photographers had been barred from the event.

“The government is striking a balance as far as possible between the need of media work and security requirements,” the Information Services Department said in a statement. “We will not comment on the accreditation outcome of individual organisations and persons.”

The rejections came as Hong Kong police confirmed that Chinese President Xi Jinping will visit the city for the anniversary of the former British colony’s return to Chinese rule on July 1, 1997.

Xi’s visit will be his first trip outside of mainland China since the coronavirus pandemic took hold about 2 1/2 years ago.

Police have announced a raft of security measures, including road closures and a no-fly zone.