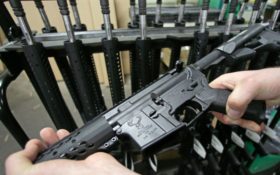 If it happened to your family, would you be prepared? This homeowner’s son was — and thanks to his readiness, his family is safe.

An attempted Oklahoma burglary Monday resulted in swift justice. Because of the homeowner’s Second Amendment rights, three criminal thugs were the only ones killed.

The Wagoner County Sheriff’s Office told local station News on 6 that three burglars attempted to burglarize a home wearing masks and gloves at about 12:30 p.m. The would-be thieves were armed with brass knuckles and a knife.

The homeowner’s son heard their forced entry, quickly armed himself and shot the thieves with an AR-15 rifle, killing all three.

“These three individuals came to this residence with the intent to burglarize it. One was with brass knuckles, the other was with a knife,” Deputy Nick Mahoney said.

The thick-headed thugs shattered the back door as they entered, making their break-in clear to the resident.

The 23-year-old armed resident shot all three criminals, aged 16, 17, and 18. Two died in the home while the third attempted to flee but died in the driveway.

And charged with their murders? 21-year-old Elizabeth Marie Rodriguez, the getaway driver.

Neighbors informed News on 6 of other recent burglaries in the neighborhood that they believe are related to the criminal gang.

“There’s always the possibility that it could be, but at this point that would be speculation. We don’t know,” said Mahoney.

One thing we do know: criminals will stay away from this armed neighborhood for quite awhile.