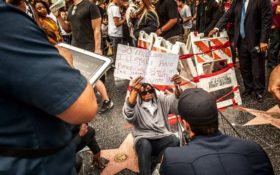 Throughout this election cycle, it has been the aim of liberals to paint conservatives as heartless, aggressive and combative.

But while the Democrats have been accusing the Republicans of “deplorable” behavior, the media has been ignoring the truth – the violent, nasty behavior in this election is coming almost entirely from the left.

On Wednesday, liberal activist Jamie Otis violently destroyed Republican nominee Donald Trump’s star on the Walk of Fame with a pickax, and admitted to the illegal act. The following day he was arrested, and the star was restored.

But what happened next speaks volumes about the current state of our nation, and the out-of-control behavior our next president must addressed.

An unidentified African American homeless woman took it upon herself to stand guard at the newly installed star, where she displayed why she believes America needs a Trump presidency.

The woman held a sign that read, “20 million illegals and Americans sleep on the streets in tents. Vote Trump.”

The left’s response?  The homeless woman was assaulted.

That’s according to a Periscope video posted by Peter Duke Photo, in which the protesting homeless woman claims she was pushed and attacked by multiple onlookers for guarding the star.

She was later arrested by local police for refusing to leave.

And she’s right to believe the star needs protection. Trump’s Hollywood star has been vandalized numerous times throughout the election. Once with a barbed wire fence built around it, and multiple times it has been vandalized with spray-paint swastikas, profanities, and even smeared animal feces.

There has even been a petition requested Trump’s star be removed from the Walk of Fame, to which the Hollywood Chamber of Commerce has denied.

President Leron Gubler told CNN, “The Hollywood Walk of Fame is a registered historical landmark. Once a star has been added to the Walk, it is considered a part of the historic fabric of the Hollywood Fame. Because of this, we have never removed a star from the Walk.”

It’s not just the star that is being attacked.

A Donald Trump impersonator, who stands by the star offering photographs in exchange for tips, told CNN that has been physically attacked by visitors numerous times.

Last week, The Horn News reported on the disturbing number of political terror attacks made on conservatives, most notably the recent firebombing of a North Carolina Republican headquarters building.

Don’t think the left is loony? They’ve bombed buildings, abused homeless woman, smeared feces, and beat up Trump supporters at riots all across the country.

The pattern of out-of-control vandalism and violence is PROOF that the left is as crazy as ever – and they’re growing more violent.