Homeless practicing martial arts on the street... WHAT!? - The Horn News 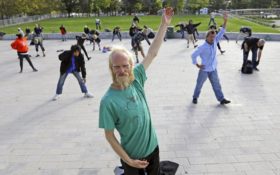 On a quiet morning outside a library in Salt Lake City, about 70 people are kicking and slicing at the air as they practice the ancient martial art of tai chi.

The group moves uniformly, a silent army save for the gurgling noises of an artificial waterfall and the wind moving through blades of grass.

One man with a long, gray beard balances on his right leg with a ragged blanket draped over his shoulders. A barefoot woman wearing torn jeans does the exercises as a tiny dog circles around her legs.

This isn’t a well-trained class of health enthusiasts wearing new tennis shoes and expensive leggings. Many participants are homeless.

In this class, the focus is less on mastering the exercise and more on building a community for transient people. People have said the class relieves their stress, encourages them to get up in the morning, build a routine and make friends.

The free program is run by a retired couple who started the classes three years ago by approaching homeless people in tents and pushing grocery carts near the Salt Lake City Public Library to encourage them to join the classes.

Bernie and Marita Hart had one participant in their first class. Now, more than 50 people regularly attend tai chi five days a week at the downtown library and Pioneer Park, where many homeless people congregate.

Bernie Hart, a 78-year-old retired machine shop owner, says he found tai chi to be a comforting way to relax, practice balance and control movement when he became anxious before skiing. He thought the exercise could help others find stability in their lives.

People gather at the library an hour before the class begins, hugging friends and chatting about their week.

The Harts arrive with coffee and rally the group to spread out and stretch.

David Christopher Coons, 54, bounces into the plaza with a cigarette hanging between his front teeth. He says “good morning” to everyone before settling into a stretching routine.

Coons, who is homeless, has been attending the classes for three years, often leading them alongside the Harts.

“It’s a great way to start the morning,” he says. “It helps with my memory and my balance while I try to figure out what’s going on in my life.”

Coons lost his job as an electrician about five years ago. He has been homeless since, sleeping in shelters or on the streets of Salt Lake City.

He says the class motivates him to take care of himself and gives him something to look forward to during the week.

“What we’re doing here isn’t tai chi . it’s a circle of friends coming together to do something for themselves, and for each other,” Coons says.

There’s a clear need for such activities.

Utah’s homeless population has steadily increased over the past three years, according to statistics from the U.S. Department of Housing and Urban Development. State officials have cited several factors for the backward slide: increasing housing costs, stagnant wage growth, the opioid epidemic.

As the class gets ready to start, homeless people cast away their belongings — coats, backpacks, Ziploc bags filled with toiletries, —and organize themselves into neat rows.

Marita Hart, a 77-year-old retired flight attendant, weaves through the crowd, smiling and patting attendees on the back.

Bernie and David are at the front of the group, leading people through a rhythm of synchronized squats, arm raises and slow, rotating movements. Everyone is quiet.

Eden Petersen, 32, has been attending the class for two years. She stands in the back, teetering out of positions and laughing at herself. She says the classes are the most peaceful part of her day. She was homeless before she moved into housing downtown about two years ago.

“It gets my blood flowing, it gets me limber and lose for the day, it just wipes any stress I have away,” she says.

A dozen or so birds perch on the top of the library, looking down on the group.

“Look, even the birds are mesmerized by us,” someone calls out.

The silence diffuses as Coons breaks into an air guitar move, and the group follows. Everyone laughs.

Marita Hart says her favorite part of the program has been watching the camaraderie between participants and the positive impact the class has on their lives. The Harts are pursuing research grants as they hope to offer more workshops at homeless shelters downtown.

“You see a lot of people that have been kicked out of a lot of places, and the system doesn’t know what to do with them,” said Bernie Hart. “But there’s never a fight, they show up here on a regular basis to do something that’s really difficult.”

When the Harts are out of town, the classes continue. Attendees take turns teaching the moves, kicking and swiping at the air as mothers jog by with strollers and library security guards watch through the windows.

“Homeless people are told what to do every place they go, but we want to encourage them to be leaders,” Bernie Hart said. “They don’t need sympathy, they need something that works.”