Homeland security chief: “Obama’s actions keep me up at night” - The Horn News 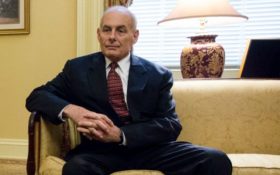 He sent a chilling warning Tuesday, that the next terror attack could come from someone sneaking across America’s southern border.

“I’m staying up late at night every night to try to prevent that from happening. So that’s what keeps me awake at night,” John Kelly said according to Fox News.

Within in insider outlook, Kelly understands the severity of the threats coming across the border, and if he’s losing sleep, it is something that should highly concern all of us.

The comments were made at George Washington University following a speech he delivered, in which he congratulated Trump for “remarkable” work combating illegal immigration.

Since Trump has been in office, there has been a 70 percent decrease in illegal immigration, according to Kelly.

But there is still a lot that needs to be done.

“I said it a lot back then, and I’m trying to do something about it now, that if there is — when there is another terrorist attack in our country, if it comes from outside the country, up until 90 days ago, I would say that that individual or individuals… get into the United States through the southwest border.”

Obama weak policies allowed for masses of illegals to flood into our country. He ordered ICE agents to only focus on immigrants convicted of serious crimes, leaving those convicted of smaller offenses to remain in America freely.

But Trump has been acting furiously on reducing the number of illegals in America and making America safe again – and allowing Kelly to rest.