Home buying gets a January sales boost in these areas... - The Horn News 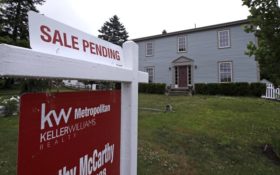 More Americans signed contracts to buy homes in January as lower mortgage rates appeared to give the real estate market a boost.

The rebound has come as average 30-year mortgage rates have fallen since peaking at nearly 5 percent in early November. Still, higher mortgage rates in 2018 depressed pending sales by 2.3 percent over the past 12 months.

The increase suggests that home sales may rebound this year after months of flagging purchases. Key to any increase in sales is 30-year mortgage rates, which slipped last week to an average of 4.35 percent, according to mortgage buyer Freddie Mac. Lower borrowing costs improves affordability for homes, which until recently have generally seen their prices climb faster than wages.

There are emerging signs that home sales might recover after a slump in home construction in December. Pending sales improved in the pricey markets of Seattle, Boston and San Jose, California, according to a report by the brokerage Redfin.

Redfin data show that pending sales jumped 15 percent in the Seattle area during January, 4 percent in Boston and 8 percent in San Jose.

The Realtors’ pending sales index improved in the Northeast, Midwest, South and West in January. Signed contracts jumped 8.9 percent in the South, where homes are generally more affordable. But in the pricier West, the increase was just 0.3 percent.

Pending sales are a barometer of home purchases that are completed a month or two later.