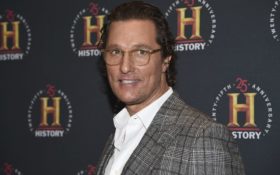 Matthew McConaughey has gone from advertising for going out and driving to selling people on staying home, and says that successfully navigating this crisis could bring great things from Hollywood and humanity.

The Academy Award winner whose meditative commercials for Lincoln vehicles have been a TV and YouTube staple for years is the narrator, co-writer and co-creator of a public service announcement promoting isolation and safety amid the coronavirus pandemic.

“We are at war with a virus, and health care troops and first responders are on the front line fighting it everyday.” McConaughey says over images of masked medical workers, children tending to backyard plants, and empty highways. “Let’s join the fight by staying home.”

He goes on to say that staying behind closed doors is “the most brave and aggressive weapon we have against this enemy.”

“It seemed like we need to let the message out that staying home is more than more than a good idea, that it’s actually what we need to do — what’s necessary to win,” McConaughey told The Associated Press on Monday. “So that’s why we started it off with saying, let’s look at this as it is a war that we’re in, instead of just saying, ‘Hey, is it a good defense to go stay at home?’ No, actually, it’s our greatest offense right now.”

McConaughey is hunkered down in his longtime hometown of Austin, Texas, with his wife, three kids and his mother, who he moved out of her assisted living facility to join them.

For most people, the new coronavirus causes mild or moderate symptoms, such as fever and cough that clear up in two to three weeks. For some, especially older adults and people with existing health problems, it can cause more severe illness, including pneumonia and death.

McConaughey said that this worldwide crisis, like others before it, can help reflect what’s good in people.

“You see humanity acting and it’s at its best in a lot of ways,” he said. “You see people helping out the least vulnerable in ways that maybe they weren’t before. You see a lot of more compassion.”

The 50-year-old actor is working on a book and teaching at the University of Texas. None of his Hollywood projects have been affected by the virus-induced industry shutdown, a pause he says could bring an incredible surge when it ends.

“We could creatively look back at this time when we get out of it as a golden age of creativity and art,” he said. “Those are times that breed great creativity in hindsight.