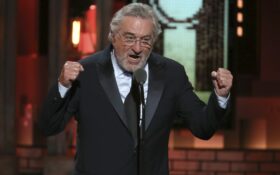 Liberal Hollywood actor Robert De Niro has taken issue with President Donald Trump ever since his election victory in 2016.

Now the star is having trouble of his own.

According to De Niro and his lawyer Caroline Krauss, the coronavirus pandemic has left him flat broke.

The news comes as De Niro is involved in an ongoing legal battle with his estranged ex-wife, Grace Hightower, after he reportedly cut her credit limit on her American Express card — from $100,000 to $50,000.

Between a high stakes divorce in which the celebrity is hemorrhaging money and a pair of businesses he has stock in failing during the virus outbreak, De Niro is suffering for money, this according to Page Six.

” … he’s taken a huge financial hit as the restaurant chain Nobu and Greenwich Hotel, both of which he has stakes in, have been closed or partially closed for months with barely any business,” Priscilla DeGregory of Page Six wrote.

Page Six also notes that De Niro had bee tabbed to shoot a movie in Oklahoma that was delayed amid the global pandemic.

His lawyer Krauss insists that according to their prenuptial agreement, De Niro would only pay his ex-wife $1 million so long as he was making $15 million.

“Nonsense,” he called it.

“I’m not a believer that a man who has an admitted worth of $500 million and makes $30 million a year,” McDonough said, “all of a sudden in March he needs to cut down [spousal support] by 50 percent and ban her from the house.”