Kathy Griffin has foul TV MELTDOWN (they cut her mic!) - The Horn News 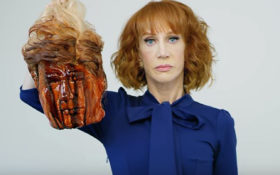 Comedian Kathy Griffin appeared on ABC’s “The View” and had a very public meltdown over President Donald Trump. Griffin was so foul mouthed and unhinged, in fact, the show’s producers were forced to cut her mic multiple times.

Griffin didn’t care she was on a live television show because she was very open with dropping the F-bomb over, and over again when discussing Trump.

The 57-year-old liberal comedian even went as far as to take back her apology she made after nearly losing her career for sharing a photo of herself holding a severed Trump head in 2017.

“Yeah, I take the apology back,” she told “The View” hosts. “F— him. And Don Jr. and Eric, or as I call them Eddie Munster and Date Rape. I’m not holding back on this family. This president is different and I have been through the mill and so now I’m back on the road. I sold out Carnegie Hall in less than 24 hours.”

Griffin explained to the hosts that she takes back her apology, she regrets ever saying she was sorry.

She stated that she only apologized because she was worried she offended the family of Daniel Pearl, The Wall Street Journal writer who was murdered by Islamic terrorists in 2002.

“I’ve performed in Iraq and Afghanistan,” she said. “Two places Trump has never been and can’t find on a map. Of course with my connection with the military I thought of literally Daniel Pearl’s mother and so I thought, OK, obviously not very many people literally witnessed that horrendous event, but when I thought of her I thought, OK, apologize.”

“And then when I found out that I was really just kind of part of the Trump wood chipper which [comedian] Michelle Wolf is in now and, you know, I didn’t know they had this apparatus already set up before my silly picture of a $5 Halloween mask and ketchup and wanted to make a statement about what a misogynist he is.”

According to Griffin, this presidency is not like the rest. She claims that she respects the position, but not when people are politically incorrect.

“You know, I was doing stand-up for so long, there was a time in the Bill Clinton days you could make fun of that Monica [Lewinsky] dress all day long and nobody thought you were a terrorist,” she said. “But now, like, you said things have gotten not only politically incorrect but this administration and learned it firsthand because I got a call the next day from the Department of Justice and I was under a two-month federal investigation for conspiracy to assassinate the president of the United States.”

Following her major scandal, Griffin’s comedy tour was widely impacted. She claims that theaters she planned to perform at received bomb threats over her upcoming appearances.

“I don’t blame the theater owners,” she said. “Because they’re used to doing ‘Mamma Mia’ or ‘Stomp’ and and all of a sudden it’s ‘I’m going to bomb Kathy Griffin in her…'”

Griffin’s mic was cut off once again as she pointed at her crotch.

This is what we’re up against, folks. A multimillionaire Hollywood liberal that believes her actions should have no consequences.

Taking back her apology a year after committing the disturbing attack does not change anything — the damage was already done and her career has continued to plummet.

Griffin will always be another washed-up comedian. She’s only using Trump as her target to make some last-minute cash.