Hollywood legend John Wayne is under attack... - The Horn News 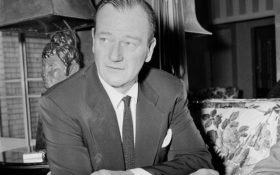 It seems like a place that can’t possibly exist in the politically correct world of 2019, especially just outside the left-wing bubble of Hollywood.

But there it sits, a few miles from downtown Los Angeles: John Wayne Airport, complete with a larger-than-life statue of this legend of the silver screen.

And if you’d like to pass through that airport and see that 9-foot statue of The Duke for yourself, you might want to book your air ticket soon.

The left is trying to succeed where movie villains failed during Wayne’s half-century career.

They want to bring him down.

As far as they’re concerned, it may as well be a statue of Robert E. Lee!

There’s a push to rename the airport because of the tough-talking actor’s many less-than-PC moments, both on the screen and off.

Already, local newspapers are treating Wayne like a fallen despot, pushing to yank his name from the terminal and drag that statue down the highway.

That was the original name – Orange County Airport – but it was renamed for the Duke, who lived nearby, after his death in 1979 from lung cancer.

“But that Orange County no longer exists,” sniffed columnist Michael Hiltzik, who pointed to last year’s Democratic victories in the area’s congressional races.

Orange County today is such an economically and ethnically diverse community that it’s hard to justify asking any member of that community to board planes at an airport named after an outspoken racist and homophobe, with his strutting statue occupying a central niche in front of the concourse.

That last bit refers to a 1971 interview Wayne did with Playboy, which certainly wasn’t enlightened by today’s standards. Indeed, some comments were racist and homophobic, especially when Wayne declared that he “believes in white supremacy until the blacks are educated.”

But Wayne’s supporters say it’s unfair to judge him by a single interview – and his family says that’s certainly not the man they knew and loved.

“My father worked in Hollywood for 50 years, and Hollywood is probably, you know, one of the most progressive and diverse communities on Earth,” Wayne’s son, Ethan Wayne, said on CNN earlier this year. “He didn’t care what race, gender, sexual orientation you were. He cared how well you did your job. He took everyone at face value.”

But it may be a losing battle.

California already scrapped John Wayne Day, commemorating his birthday, in 2016 when the State Assembly voted against it 36-19.

“Opposing the John Wayne Day resolution is like opposing apple pie, fireworks, baseball, the Free Enterprise system and the Fourth of July,” said a disappointed Matthew Harper, a Republican state assemblyman who sponsored the measure.

He blamed “the orthodoxy of political correctness.”

An editorial in The Washington Examiner said the airport battle is another sign of the PC takeover.

“The actor’s opinions have been in print for almost 50 years and, contrary to what some may think, they were problematic back then, too,” wrote Madeline Fry.

But she said to leave his name up, for now: “Removing his name from Orange County’s airport now only validates what many Americans are coming to believe: You can’t say anything anymore, darn it, without being discovered and punished by the mob.”

Indeed, anyone coming after Wayne might want to take a look at another line from that same controversial Playboy interview – words that now mark his grave.

“Tomorrow is the most important thing in life,” he said. “Comes into us at midnight very clean. It’s perfect when it arrives and it puts itself in our hands. It hopes we’ve learned something from yesterday.”

But we can’t learn from yesterday if we erase it.