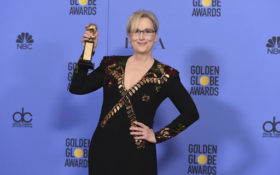 The Oscars are right around the corner. And while elite celebrities are picking out their thousand dollar outfits and planning extravagant after-parties, they’re bound to take some time to wonder, “How will I use politics to steal the show and advance my career?”

But one Hollywood insider just slammed an actress infamous for her liberal rants.

Actress Meryl Streep stole the spotlight when she attacked President Donald Trump while accepting a Golden Globe award, focusing on specific rhetoric from his campaign, and patting herself and her wealthy friends on the back for providing Americans with something to watch other than, “football and martial arts, which are not the arts.”

If we’ve learned anything from the awards shows this year, it’s that these celebrity morons have decided it’s their responsibility to lecture Americans about politics. But with Streep up for a best actress award, will she get another big stage to flaunt her know-it-all attitude?

Not everyone in Hollywood is clapping.

With the Oscars airing Sunday night, one anonymous Oscar voter spoke to Scott Feinberg of The Hollywood Reporter about Streep’s performance in “Florence Foster Jenkins,” and it’s definitely not what she wants, or expects to hear.

“I though Meryl Streep played it like a clown,” she said. “I think she solidified her nomination when she gave that speech at the Golden Globes. I don’t think she would have gotten nominated without it.”

If this Oscar voter is right, Streep might not end up behind the microphone, and could lose her shot to irrelevantly weigh in on political matters.

Fingers crossed this voter is spot on.