Hollywood can’t compete with this PGA blockbuster - The Horn News 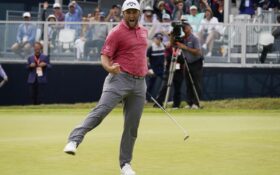 “Truth is stranger than fiction…”

As the old adage goes, so does the PGA compare to an out-of-touch, out of ideas Hollywood. For all of their blockbuster movies, special effects, and billion dollars in production value, we still witnessed a better product with Jon Rahm’s win at the US Open.

It was a story encapsulated in true drama that unfolded right in front of our eyes. Rahm needed to drop two strokes going in to the seventeenth tee to usurp Louis Oosthuizen for his first major championship tour win. It was also a story of redemption, since Rahm was pulled from the course at Jack Nicklaus’ Memorial tournament in May 2021 after he was winning by six strokes against the whole field.

Rahm also picked up his first PGA tour win at Torrey Pines back in 2017. And he recently had a son and he proposed to his wife in the San Diego area.

Hollywood can’t compete when the stars aligned for the young Spaniard golfer as he battled back for a historic finish to birdie the last two remaining holes.

Rahm completed his sixth PGA tour win in style with two absolutely electric left to right putts on seventeen and eighteen. Torrey Pines’ eighteenth hole once again provided a fist pumping champion that reminded golf fans of Tiger Woods getting two birdies on the eighteenth hole to force a playoff with Rocco Mediate in 2008.

And that’s all because the United States Golf Association knows how to build the intensity between a group of the best players on the planet. It’s not the prefabricated “fun” and entertainment that we are seeing from Hollywood these days.

The LA elite want every outcome of their content controlled and “woke” and politically correct. But sports, primarily golf, delivers stories of the best of the best a chance to seize the opportunity and win.

That’s why the PGA tour can boast a more genuine experience than any of CGI-heavy movies Hollywood is churning out these days.

“Truth is stranger than Fiction, but it is because Fiction is obliged to stick to possibilities; Truth doesn’t”

When someone tries to completely control the entirety of situation like Hollywood, it confines the parameters of where you can build enthusiasm for something.

Golf has no such chains.

Evan Scheiber is The Horn News’ Golf editor and enthusiast.