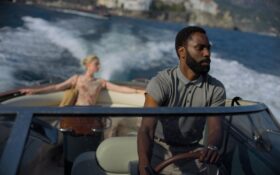 In the latest plan for Hollywood’s hopeful return to moviegoing during the pandemic, Warner Bros. will release Christopher Nolan’s “Tenet” in an unprecedented fashion, opening it internationally first on Aug. 26, with a U.S. release in select cities to follow over Labor Day weekend.

Warner Bros. on Monday said “Tenet” will arrive in more than 70 countries on Wednesday, Aug. 26, including Japan, Russia, much of Europe, Australia and Canada. The $200 million thriller will open in the U.S. about a week later on Thursday, Sept. 3.

The staggered release will be tailored to outbreaks of COVID-19. Instead of the usual global launch of a summer blockbuster, “Tenet” will make its way through theaters as they are open. The film, originally set for release July 17, has already had its premiere postponed several times. Each time, spikes in cases through the U.S. has forced the studio to remake its plans.

Now, Warner Bros. has upended the usual launch of a would-be blockbuster. When “Tenet” lands in the U.S., it will be piecemeal throughout the country and dependent on areas where cinemas are allowed open. They are currently shuttered in California and New York (each home to one of the country’s top two markets), among other states. But that could change in the next month.

Warner Bros. will also deliberately spread out its opening weekend, debuting the film mid-week to space out eager moviegoers. The major theater chains are expecting to operate with heightened cleaning measures and at reduced capacities of 25-50% to facilitate social distancing. AMC Theaters, the world’s largest chain, last week postponed its U.S. reopening to mid-to-late August.

While the release of other tentpoles have been further delayed, Nolan and Warner Bros. have sought to lead the charge back into theaters. Exhibitors, the wide majority of which have been closed for more than four months, are desperate for new films and have implored distributors to accept atypical release patterns.

Last week, cinemas reopened in China, the world’s second largest market, although “Tenet” doesn’t yet have a release date there. In Europe, about a third of AMC’s locations have resumed operating. In the meantime, movie theaters have mostly been showing older films.