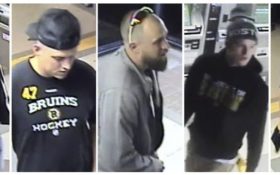 Transit police in Massachusetts say four people have been arrested in connection with an assault just hours after the Boston Bruins beat the Carolina Hurricanes in a playoff game.

Massachusetts Bay Transportation Authority police posted surveillance images of five suspects online, many wearing Bruins clothing, and announced Wednesday that based on numerous tips from the public, four had turned themselves in.

Police say the victim suffered facial fractures in the attack at the North Quincy Station at about midnight Friday.

No arraignment information was immediately available.