Rosa Parks' home to be auctioned - The Horn News 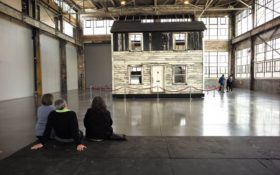 The house where Rosa Parks sought refuge after fleeing the South will be offered at auction after being turned into a work of art and shipped across the Atlantic Ocean twice.

Guernsey’s auctioneers said it will offer the house where Parks’ family lived in a midsummer auction in New York City that also will feature several other items related to African-American history and culture. It said it expects the tiny wood-framed house marked with peeling paint to fetch seven figures.

The house, owned by Parks’ brother, was abandoned and set for demolition in Detroit before Parks’ niece, Rhea McCauley, bought it for $500 and donated it to American artist Ryan Mendoza in an attempt to preserve the legacy of the civil rights activist. Mendoza shipped it to his home in Berlin and reassembled it in his yard, where it drew a steady stream of visitors.

Mendoza brought it back to the U.S. this year for a temporary exhibit in Rhode Island, but he had been searching for a permanent home. The delicate structure should only be rebuilt one more time, he said.

“It’s a wonderful way to present the house again to the American people. Let them decide what this house is worth,” Mendoza said. “I hope it ends up in the hands of somebody who loves Rosa Parks. I hope it will be on public display.”

The pieces of the house, currently in Providence, will be taken in two, 40-foot (12-meter) shipping containers to a storage area in Massachusetts on Friday, Mendoza said.

Parks moved to Detroit in 1957, two years after refusing to give up her seat on a bus to a white passenger in Montgomery, Alabama. Her family says Parks stayed in her brother’s home with 17 other relatives.

Arlan Ettinger, of Guernsey’s auctioneers, said the house was not much to look at but is a “national treasure” for what it represents. Guernsey’s handled the sale of Parks’ personal archives after her death for $4.5 million, and Ettinger noted that collection is now in the Library of Congress. He said that “almost guarantees that nothing of hers of any importance will ever surface again” for sale.

“As the guy who sold a guitar recently for nearly $4 million, a baseball for nearly $3 million, there is no baseball, no guitar as important as this house,” he said.

The proceeds from the sale will go in part to a foundation set up by McCauley to help preserve her aunt’s legacy, Mendoza and Guernsey’s said.

As part of the same auction, Guernsey’s also will sell items including two pages of notes handwritten by Parks describing her first encounter with Martin Luther King Jr., in which she writes that “I knew I would never forget him;” Alex Haley’s manuscript of “The Autobiography of Malcolm X,” including handwritten notes by Malcolm X and Haley; and the first recording contract for the Jackson Five and Michael Jackson, signed by their father, Joe Jackson, in 1967 with Steeltown Records.