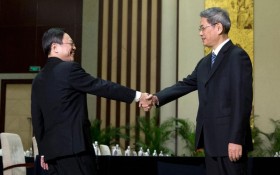 Taiwan’s president will meet Saturday with his counterpart from once icy political rival China, the Taiwanese side said, a historic first culminating nearly eight years of quickly improved relations despite wariness among many Taiwanese of the mainland government.

Taiwanese President Ma Ying-jeou will meet Chinese President Xi Jinping in Singapore to exchange ideas about relations between the two sides but not sign any deals, presidential spokesman Charles Chen said in a statement Wednesday.

They never talked formally until Ma, the Nationalist president since 2008, lay aside old hostilities to set up lower-level official meetings. China and Taiwan have signed 23 deals covering mainly trade, transit and investment, binding Taiwan closer to its top trading partner and the world’s second largest economy.

The announcement came overnight and there was no immediate reaction from the Chinese government at that hour, and officials in China could not immediately be reached for comment.

Ma is stepping down as president next year after his maximum two terms. Since last year, many Taiwanese have criticized the Ma government for getting too close. They fear China will eventually leverage economic relations to exert more power over the island.

The two presidents will meet to “solidify Taiwan-mainland relations and keep the status quo across the Taiwan Strait,” the statement said, referring to today’s fragile de facto independence for Taiwan but no further aggression toward Beijing.

The statement said Taiwanese officials will hold a news conference about the meeting later Wednesday, and Ma will hold another one on Thursday.