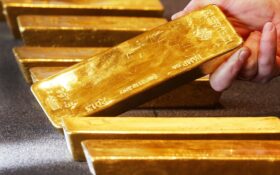 A treasure map, a former Nazi brothel, and a long-lost diary have a team of history lovers on the brink of uncovering a half-a-billion fortune.

They will find out if their secret treasure map is accurate this week.

Treasure hunters say they may have found the burial spot for 48 crates of Adolf Hitler’s secret gold stash in Poland. The fortune is reportedly buried under an 18th-century palace in Poland that was used by some of Hitler’s most notorious henchmen as a brothel during the war.

According to The Sun, tons of gold, jewelry, and other valuables were stolen and presumably hidden under the Hochberg Palace under the direction of Heinrich Himmler, who commanded the SS — Hitler’s notorious paramilitary forces — during World War 2.

The treasure is called the “Gold of Breslau” and was intended to be used by Hitler’s loyalists to revive the Nazi war machine after the war. It disappeared out of a police headquarters in Wroclaw, Poland right before Soviet forces took over the city and it has been lost to history since.

Treasure hunters from the Silesian Bridge foundation, a non-profit organization, said they found a map to the lost fortune in the diary of an SS officer that served under Himmler.

On March 12, 1945 his diary said “a trough has been dug in the orangery, which is a safe ‘home’ for the delivered chests and containers” at the palace.

“48 chests from the Reichsbank, in good condition, were hidden, very well covered with earth and ‘greened’ with still living plants,” the diary read. “Let providence watch over us.”

The palace “was often visited by high-ranking SS officers who treated it like a brothel,” one of the treasure seekers told The Sun. The descendants of one of the SS officers turned over the diary and suspected treasure map to the experts as an act of atonement for the crimes committed by the Nazis in World War 2.

Excavation of the suspected treasure begins this week.