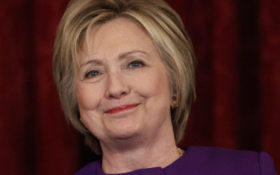 After an embarrassing defeat in the presidential election, failed Democratic presidential candidate Hillary Clinton is back for her revenge.

While Hillary claimed she wanted a peaceful transition of power during her candidacy (when liberal media polls were predicting her victory), she is singing a completely different tune after her defeat.

She wants more violence in the streets — and she’s willing to throw millions of dollars to help.

After declaring herself as, “part of the resistance” at the Women for Women International forum in New York Wednesday, Politico and Axios reported that Hillary plans to use her donor network — made up of Wall Street billionaires and foreign oil tycoons — to launch a political action committee (PAC) to raise cash for anti-Trump “resistance” groups.

According to sources, she is working with former aides and donors to start an organization that will raise funds for groups that have “impressed her” since her embarrassing election loss.

A source told CNN that Hillary has been watching Trump resistance groups and is “particularly fired up”  to get back in the game.

She plans to act as a connector between resistance groups and her fat cat Wall Street donors… and some critics say she’ll likely pocket some of the cash as well.

She has been spending time in Washington, D.C., New York City, and Chappaqua, N.Y., meeting with donors and leaders of these so-called “resistance” groups, and recruiting people to join her anti-Trump club.

No surprise — the Clinton cartel has already flocked to her side.

She has been working with her campaign’s finance director and former Clinton Foundation chief development officer, Dennis Cheng, on bringing big money donors like billionaire George Soros on board.

Judith McHale, who worked as her undersecretary when she was secretary of state, and former chairman of the Democratic National Convention Gov. Howard Dean, are helping to find the underground anti-Trump groups.

It’s further proof that Hillary’s meltdown has gone nuclear. She can’t move on from her campaign loss. In fact, her “resistance” organization is expected to be called Onward Together — a pathetic tribute to her campaign slogan, Stronger Together.

While there is no official launch date for the organization, it could come as soon as next week.