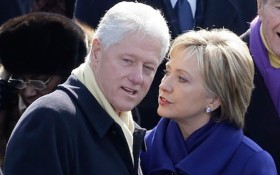 If you ever wanted proof that the Clinton Foundation “charity” amounted to nothing more than legalized bribery, this week we got the clincher. What’s more, the shocking proof came from the Clintons’ “friends,” not from their enemies. And now, former Secretary of State Hillary Clinton could be facing serious jail time.

As Hillary edged closer to running for president in 2016, donations to the Clinton Foundation plummeted.

The amount of money the Foundation rakes in annually shrunk by more than half!

The year that Hillary announced she was running for president a second time — in 2015 — cash flow to the nonprofit fell by 37%… and things kept going south.

By 2016, the year Hillary lost out to President Donald Trump, donations fell by 42%.

Where was all that money going? Did the donors to the Clintons’ “charity” suddenly lose their interest in helping the poor people of the world?

Clinton Foundation officials have let the cat out of the bag: The foundation was just a substitute — a placeholder — for her presidential campaign.

Donna Shalala, former president of the Clinton Foundation, said 2016 was “a very challenging” year for fundraising… because the Clintons focused all their attention on the presidential campaign.

The current head of the foundation admitted Shalala was right. “Starting in 2015 when Secretary Clinton launched her presidential campaign, we voluntarily adopted restrictions on fundraising,” wrote Kevin Thurm, the acting CEO.

In other words, the Clintons told her friends to quit laundering their donations through her “pay-for-play” foundation and make their donations directly to her… or else.

And that’s when the money stopped rolling in.

Donations to her phony “charity” dipped a whopping $36 billion after her presidential loss.

Things got so bad that foundation announced this past August that Hillary would be returning to look after its fundraising.

That might explain why she’s constantly hinting that she is running for president a third time in 2020 — to jump-start donations to foundation coffers.

It’s inconceivable that any reputable charity would see a 52% fall-off in donations without a major catastrophe. The Clinton Foundation isn’t doing any less (or any more) to help the downtrodden in Haiti or Africa. If that’s what her donors were paying her for, they’d keep on paying her for it.

Trump publicly called out her financial shenanigans on Twitter this week.

“Clinton Foundation donations drop 42% – which shows that they illegally played the power game,” he tweeted on Sunday. “They monetized their political influence through the Foundation.”

Clinton Foundation donations drop 42% – which shows that they illegally played the power game. They monetized their political influence through the Foundation. “During her tenure the State Department was put in the service of the Clinton Foundation.” Andrew McCarthy

Then he quoted Andrew McCarthy of the National Review who said, “During her tenure the State Department was put in the service of the Clinton Foundation.”

Senate Republicans have begun investigating the Clinton Foundation’s Uranium One deal with Russia after a $145 million donation was made to her charity. Before he resigned as attorney general, Jeff Sessions publicly announced that he was thinking of appointing a special prosecutor to investigate the Clintons.

Kevin Thurm, called the allegations nothing more than “recycled claims” that have been “debunked again and again.”

But make no mistake: The Clinton Foundation is whistling past the graveyard… and on the way, it’s going to pass the jail cell and the poor house.