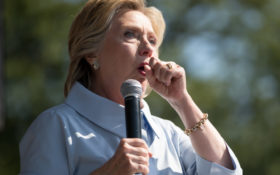 The Clinton family funneled foreign money like a sieve through its tax-exempt foundation in order to enrich themselves, advance foreign interests, and rip off its few charitable donors.

That’s not my opinion: That’s the official, sworn testimony offered by three experts…and backed up by 6,000 pages of documentation.

Witnesses, including Judicial Watch’s Tom Fitton, brought the light to bear on multiple avenues of the Clinton Foundation’s illegal activities before Congress on Thursday. (Watch the full hearings here.)

He and his investigative partner, Lawrence W. Doyle, then rattled off a list of the Clinton Foundation’s crimes:

“The foundation began acting as an agent of foreign governments ‘early in its life’ and continued doing so throughout its existence,” Moynihan said.

The Saudis gave the Clinton Foundation donations ranging between an estimated $18 and $50 million…and got a major arms deal in return, Tom Fitton told the House Oversight Committee earlier in the hearing.

In return, Hillary Clinton spent her time in the Obama administration promoting the interests of its big-dollar foreign donors—while she was supposed to be watching out for America’s interests!

“Pay-to-play and favoritism for Clinton Foundation supporters with the Clinton State Department” filled the publicly disclosed records that Judicial Watch jimmied out of the federal government.

Crooked Hillary’s influence-peddling got “so bad that the crown prince of Bahrain couldn’t get a meeting directly with Mrs. Clinton through the State Department—so he went through the Clinton Foundation to get the meeting” instead!

“There is enough evidence to warrant serious investigations of the Clinton Foundation,” Fitton said.

Moynihan said that the Clinton Foundation should have registered as the agent of a forging power under the Foreign Agents Registration Act.

Since it broke the law, “the foundation is not entitled to its 501(c)3 tax-exempt privileges,” Moynihan said.

That’s just the tip of the iceberg, though.

“The intentional misuse of donated public funds” was another one of the Clinton Foundation’s crimes, Doyle testified.

“The foundation falsely attested that it received funds and used them for charitable purposes, which was in fact not the case,” he told Congress.

Most of the foundation’s activities, especially the ones “larger in scope,” were “profit-oriented and taxable undertakings of private enterprise.”

“The foundation was not a charitable organization,” Doyle concluded.

“In point of fact was a closely held family partnership” that “sought in large measure to advance the personal interests of its principals”—Bill, Hillary, and Chelsea Clinton.

The Clinton Foundation could owe “millions of dollars in delinquent taxes and penalties,” the committee heard Thursday.

In fact, there could be stiffer penalties…like time behind bars.

Gregg Jarrett summed up the testimony for Sean Hannity by saying that Bill Clinton used “the foundation as his own personal piggy bank, as his wife put a ‘for sale’ sign on the door of her office as Secretary of State.”

“It’s good that there is an FBI investigation,” Jarrett told Hannity. “There should also be a grand jury to look at it.”

Doyle had just one more bomb to drop in front of smiling Republicans and panicked Democrats.

The Clinton Foundation is not really a tax-exempt foundation, so anyone who made a donation to that money-grifting enterprise can’t write it off.

That could mean millions of dollars in tax penalties for their donors, too.

The people who tried to use tax law to bribe the secretary of state could may have to pay up…or possibly face charges themselves.

The outgoing chair of the committee, Republican Mark Meadows North Carolina, said it’s important to hold the Clintons accountable in order to show that no one is above the law.

“Whether you’re a president, or whether you’re a plumber or a teacher, that same law should apply to everybody,” he told The Hill. “Just because you have a foundation that has collected $2.5 billion dollars, it shouldn’t make you any less accountable to the American people.”

The next step needs to be an indictment, then a trial by a jury of 12 average Americans—cab drivers from Queens, oil hands from Dallas, secretaries from Salt Lake City, and housewives from Topeka.

The Clinton crime wave is coming to an end. And the Clinton jail term could be right around the corner.