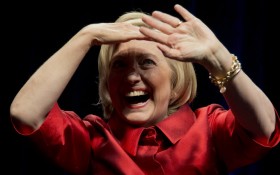 Former Secretary of State Hillary Clinton just did a nosedive into the deep end of dangerous conspiracy theories at the bitter end of her political career.

She’s resorted to saying anything to save her crumbling legacy.

During her “An Evening With The Clintons” tour stop in Los Angeles, Hillary told the sparse audience about her conspiracy theory about that lonely election night in November 2016.

According to her, the election was stolen by President Donald Trump.

“You can run the best campaign, you can even become the nominee, and you can have the election stolen from you,” she said, quoted by CNN.

Hillary is feeding into an increasingly unhinged Democratic hysteria machine, and critics say the far-left are pushing a dangerous narrative.

Need proof that she’s unhinged? These were her exact words in 2016:

“Every time Donald thinks things are not going in his direction, he claims whatever it is is rigged against him. We’ve had free and fair elections. We’ve accepted the outcomes when we may not have liked them. He is a denigrating, he’s talking down our democracy. And I for one, am appalled.”

Now that they’re out of power, though, Hillary is ramping up the “rigged” rhetoric in the mainstream media.

And she’s not alone.

“We have to inoculate against that, we have to be prepared for that,” Pelosi said to The New York Times.

On Sunday, Rep. Al Green, D-T.X., called for the impeachment of Trump because he’s afraid that without Congress’ intervention, Democrats will lose 2020.

In other words, Green wants to effectively cancel the American people’s ability to chose their president by overthrowing the White House.

And the dangerous part is that Democrats unhinged rhetoric just may be working.

The mainstream media runs on liberal spin, not the truth. This is why it hides stories of states such as California, Washington and New Jersey all introducing legislature to remove Trump off the 2020 ballot while Hillary’s complained the election was rigged against her.

Democrats are trying to strip millions of American voters’ ability to vote for Trump away.

If that’s not enough, they’re also trying to change the very voting process. Sen. Elizabeth Warren, D-M.A., has proposed to rid of the electoral college.

Liberals know they can’t fairly win, so the fix is in. They say Trump stole the election. They want him illegally removed from office, removed from the election ballots, impeached, and more.

That, folks, is called a coup.

Behind the curtains, Democrats are using quotes like Hillary’s as retaliation to rig the election process — and the mainstream media is cheering them on.

“Democrat Texas Congressman Al Green says impeachment is the only thing that can prevent President Trump from re-election in 2020.” @OANN In other words, Dems can’t win the election fairly. You can’t impeach a president for creating the best economy in our country’s history…..

At least for now, Hillary’s conspiracy theory seems to be falling flat.

American voters aren’t buying it… literally. The prices to attend her and Bill’s latest show went as low as $2 in Las Vegas, so they’ve canceled the rest of the tour.

If she keeps up her relentless conspiracy rhetoric she might find out that it’ll cost the Democrats more than the 2020 election; it could cost them their credibility for years to come — or what they had left of it.