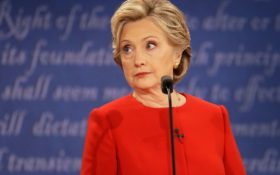 Hillary Clinton is not over losing to Donald Trump in the 2016 presidential election — and she made sure to bring it up again when addressing a room full of bright young Yale students.

The former secretary of state referenced her second defeat to Trump and mocked her own loss of the so-called “Blue Wall” in Michigan.

She admitted, “I’m still not over it” and warned that America was becoming dangerous for people like her because there was an “assault” by the right against the liberal media’s bias.

“I am thrilled for all of you — even the three of you who live in Michigan and didn’t request your absentee ballots in time,” she said to laughter.

“Now, I see looking out at you that you are following the tradition of over-the-top-hats,” Hillary told the graduates at Yale’s Class Day, who wear funny hats as part of their commencement ceremony. “So I brought a hat, too. A Russian hat. Look I mean — if you can’t beat ’em, join ’em.”

Hillary Clinton brings out a Russian hat during her speech at Yale University and honored the school's tradition of wearing over-the-top hats. https://t.co/pcg42VUbTK pic.twitter.com/9RcdYosqI2

But the humor could only last so long. It was just a matter of time before Hillary got serious and started whining about her minuscule problems.

“I still think about the 2016 election,” Hillary said wistfully. “I still regret the mistakes I made.”

Hillary also spent the weekend trying to shore up support for establishment Democrats in key races — despite political experts pointing out that her endorsements likely do more harm than good.

It’s sad sight, seeing an elderly stateswoman flounder so bad after losing her second bid for the presidency.

Will she ever move on? Probably not.

Thank you, Hillary, for showing America once again why we should be so thankful to have President Donald Trump in office.