Hillary Clinton’s best friend to “tell-all” (lock her up!) - The Horn News 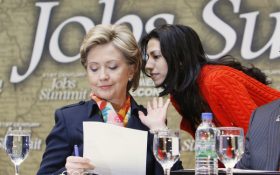 Hillary Clinton’s best friend and closest aide, Huma Abedin, wants publishers to pay her $2 million to write a “tell-all” book about her boss.

The news has critics excited, because if anyone would know what Hillary has been up to, it’s Abedin.

But if you think she’s really going to tell all, we’ve got bad news.

Huma has been at Clinton’s heel since she was first lady. She followed her into the Senate, the State Department, and – she hoped – the White House.

That would have given Abedin massive influence – and done maximum damage to the United States.

Abedin’s family has long, deep, ties to Islamic fundamentalist groups. So does Huma.

For 13 years, Huma edited a radical Muslim journal based in London. Her mother has long ties to the Muslim Brotherhood, the leading source of Islamist hate theology.

Chances are, that won’t be included in her book.

Huma may cash in on another family scandal, though. Just before Hillary’s (second) devastating presidential loss, Abedin got word that her husband was a pedophile.

Last September, word broke that ex-Congressman Anthony Weiner had sent sexually explicit messages to a 15-year-old girl. Authorities are still considering whether or not to charge him. Evidently, being in Congress has its privileges.

Experts say that could be her meal ticket, not the Clinton family’s hijinks. But it’s a delicate balance. “If she reveals a lot, it turns your stomach,” Esther Newberg, a literary agent, told The Hollywood Reporter. “If she doesn’t, she puts the publisher in a bad place.”

Whether the publishers know it or not, Abedin already has a job with her book – and it’s not about telling the truth.

Huma really hopes the book industry will pay her a cool $2 million to rehabilitate Hillary’s reputation. She wants to get Hillary back into contention for the White House again.

And Hillary’s reputation needs help. Even her hapless presidential campaign has come under fire in recent weeks.

A new book, Shattered: Inside Hillary Clinton’s Doomed Campaign, reveals that Hillary pouted so bad after she realized she had lost the election to Donald Trump that Barack Obama called her and told her, “You need to concede.” Then he said the same thing to John Podesta, Hillary’s campaign manager, whose hacked e-mails gave a scandalous look inside the dysfunctional Democratic Party.

It contains another eye-opening fact: it says Hillary valued “loyalty over competence.” Loyalty is especially important if you’ve been committing crimes and you don’t want your aides to testify against you – or tell the truth in their books.

Shattered had one other, painful truth: Since Bernie Sanders was able to win several primaries with a huge minority turnout, and even though the race was rigged, it convinced Hillary that they needed to spend more time campaigning in the inner city.

A crony of Bill Clinton’s said they “should have been out pursuing white people.”

The loss should have convinced her staffers that Hillary’s such a lousy candidate that voters would rather vote for a socialist fossil.

Now, Huma is demanding $2 million to tell you differently.